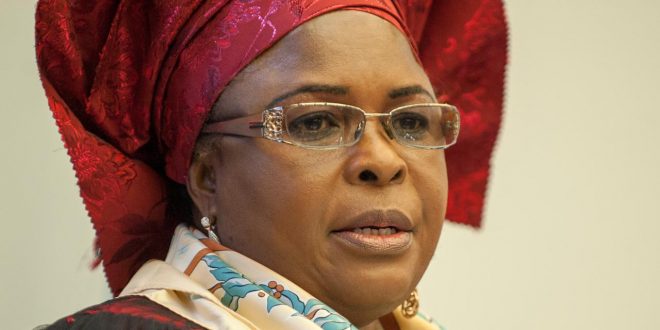 According to the Nation, a source at the anti-graft agency who spoke on condition of anonymity, said the company, Magel Resort Limited, allegedly secured over N200m IT contract from the National Information Technology Development Agency.

There are allegations that some domestic aides of the former First Lady remitted about N5.7billion into the accounts of three firms linked to Mrs. Jonathan. As part of the investigation, some Federal Government agencies were found to have remitted funds into the account of Ariwobai Aruera Reach Out Foundation, her NGO, which has N2,475,784,487.77. Detectives put the cash in the two domiciliary accounts of the ex-First Lady at $20,731, 173. Speaking on the latest discoveries, the EFCC detective said

“This is not a case of witch-hunt or vendetta. We have retrieved records of transactions and those concerned. There is a strong case of abuse of office. Nigerians should prevail on Mrs. Jonathan to seek equity with clean hands by subjecting herself to legal process. How did domestic aides come about billions? Why will a resort company secure an IT contract? How did a furniture firm without a fixed address come about N1.140billion? As we investigate the ex-First Lady, our detectives dig out more evidence of alleged money laundering by her between 2009 and 2015.”

The source gave an insight into the latest findings by detectives on Mrs. Patience Jonathan.

“A company owned by Mrs. Jonathan is Magel Resort Ltd. It was incorporated by Mrs. Jonathan’s late mother. But Patience Jonathan became the sole signatory to the account of the company by board resolution upon the demise of her mother. The EFCC is probing the circumstance in which the firm though registered as a resort agency secured over N200m IT contract from the National Information Technology Development Agency. The contract was allegedly funded through the National Information Technology Development Fund.”

Several other persons under investigation for money laundering by the anti-graft agency were discovered to have made payments into the company’s account. Some of them, including an hotelier in central area, Abuja, have been invited for questioning.

“The total sum allegedly laundered through the account of Magel Resorts Ltd run by Mrs. Jonathan and her late mother is N2.114billion. Also allegedly laundered by the former First Lady through the account of Lawari Furniture and Baths Ltd is N1.140billion. The company’s address is given as 100 Akamfa Road, Yenagoa, Bayelsa State. The bulk of the money was deposited by Bureau de Change operators. The BDC operators have already been invited by the EFCC for questioning”.

EFCC sources said that the addresses of most of the companies were discovered to be fictitious as mails sent to them were returned undelivered.

Ariwobai Aruera Reach Out Foundation, an NGO, was discovered to have various accounts but the principal account is domiciled in Diamond Bank.

“The commission stumbled on evidence in which several government agencies made payments into the account. A total inflow of N2, 475,784,487.77 was recorded in the account between 2009 and 2015.”

The source also spoke about the deposits in the domiciliary accounts of the ex-First Lady.