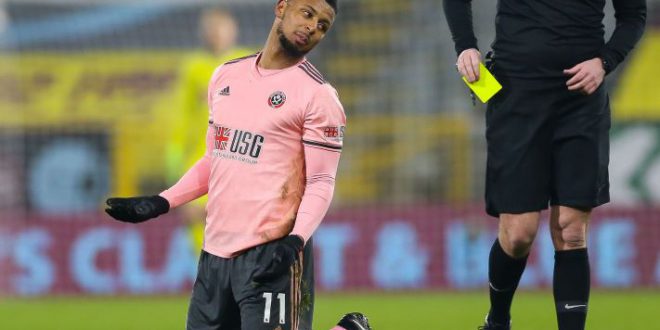 The centre-forward already had nine points on his licence for three separate speeding offences.

Sheffield United player Lys Mousset has been fined and disqualified from driving for six months after crashing his £350,000 Lamborghini on a 30mph road.

He crashed into a Vauxhall and a Land Rover on Abbeydale Road South, in Sheffield, in January, leaving his orange supercar badly damaged, magistrates in the city heard.

The court was told by prosecutor Ellis Wilsdon the force involved in the collision meant the “Lamborghini must have been travelling at substantial speed and must have been on the wrong side of the road”.

Ms Wilsdon also said Mousset had originally claimed not to be the driver of the vehicle and failed a road-side breath test.

However, when he was tested at a police station, the player gave an alcohol reading of 32 micrograms per 100 millilitres of breath. The legal limit is 35.

She also said Mousset told witnesses his cousin had been driving the car at the time of the crash before leaving the scene.

Mousset did not attend the hearing but his lawyer, Nick Terry, pleaded guilty on his behalf to driving without due care and attention and failing to stop following an accident.

Mr Terry told the court his client had been arguing with his cousin after he offered to tell police he was the driver at the time of the crash.

He said Mousset eventually went along with this idea but later changed his mind and decided to “put the situation right”, admitting to police he was the driver when he was arrested.

He also told the court the former Bournemouth player only left the scene to get his insurance and other documents and he believed people there knew who he was.

Mousset was also given nine penalty points on his licence and disqualified from driving for six months.

He already had nine points on his licence for three separate speeding offences.

Mousset signed for Sheffield United in 2019 from Bournemouth in a £10m deal. He has played for the French national under-21 side.

Charles Igbinidu is a Public Relations practitioner in Lagos, Nigeria
@https://twitter.com/ionigeria
Previous ‘World’s most identical twins’ get engaged to the same man plan to get pregnant at the SAME TIME
Next Hundreds of people given expired vaccine doses at Times Square in New York