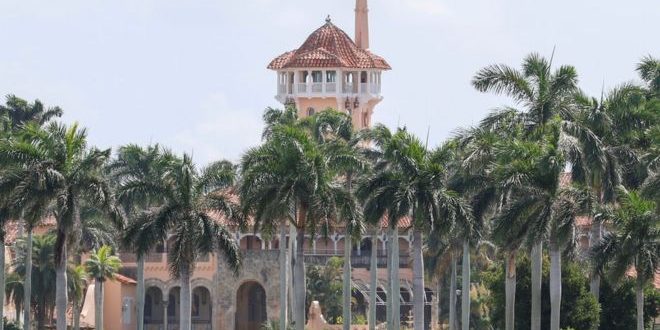 Florida town says Donald Trump can stay at his resort

The good news for Donald Trump is that he can continue living at his Florida club, Mar-a-Lago, despite facing possible eviction.

At a Palm Beach council meeting on Tuesday, a lawyer for the former president explained that Mr Trump is a club employee, which means that he abides by a decades-long agreement stating that no-one could live at Mar-a-Lago unless they worked there.

And so, the lawyer argued, he can remain on the premises.

Mr Trump bought Mar-a-Lago in 1985, and over the years has spent part of his winters there.

Upon leaving the White House, he moved in. But some of his neighbours want him out, saying his permanent residency violates an agreement that was reached nearly 30 years ago, one that turned the estate into a private club.

The Palm Beach meeting highlighted the issues of wealthy neighbours who are meticulous about property value, think their town should look a certain way, and feel ambivalent about their famous neighbour.

They worry that Mr Trump will hurt their community’s “genteel” atmosphere, said one lawyer, Philip Johnston, who works for an organisation called Preserve Palm Beach.

One of the concerns of the people in the community, explained Mr Johnston, was that the former president would act as a “beacon” for some of his more “rabid, lawless supporters”.

Wes Blackman, who worked as a project director at Mar-a-Lago in the 1990s, says Mr Trump’s neighbours are known for their strong views concerning his estate, and also for vigorously defending their turf.

Years ago, Mr Trump built a 700-foot (213 metre) stucco-and-concrete wall, a barrier that was about seven high, at his estate.

A neighbour was not happy with it. But Mr Blackman showed that the wall was built entirely on Mr Trump’s land, with .01 inch to spare. However much the neighbour disliked the wall, there was little he could do about it.

The disputes between Mr Trump and his neighbours were often over small matters. “It comes down to hundredths of inches”, as Mr Blackman says, describing the fence that Mr Trump built. Yet the neighbourhood battles could be ferocious.

The most recent fight, the one over his residency, appears to have fizzled out.

At their meeting, the members of the town council did not vote in a formal manner on the technical issue of his status as a resident. Yet they gave way to his desire to live there, conceding that he could remain there, and still abide by the agreement.

Charles Igbinidu is a Public Relations practitioner in Lagos, Nigeria
@https://twitter.com/ionigeria
Previous New coronavirus discovered in bats in Thailand – and their antibodies can neutralise the pandemic virus
Next Impeachment Managers label Trump ‘inciter-in-chief’