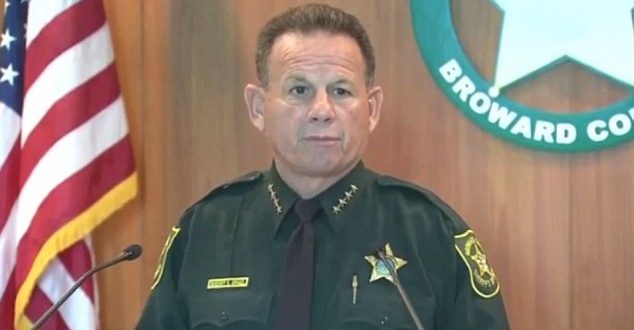 The armed deputy who was on campus at Marjory Stoneman Douglas high school when a gunman massacred 17 people stood outside the building as it occurred and did not go in to engage the shooter, the Broward County sheriff, Scott Israel, said on Thursday.

The armed security guard did nothing to stop the attack, instead hiding from gunman Nikolas Cruz when he opened fire, killing 17 on February 14.

Scot Peterson, the school’s resource officer, did not confront the gunman and instead stood positioned outside the school during the massacre, Broward County Sheriff Scott Israel said Thursday.

The 54-year-old ‘never went in,’ Israel explained, citing security footage, and adding that he was armed and in uniform when bullets started to fly.

And in an interview with the New York Times, Coral Springs Officer Tim Burton revealed Peterson hid from Cruz when the teenager started shooting.

Deputy Scott Peterson resigned from the department on Thursday after being told he would be suspended, Israel said.

He did not say if Peterson would face criminal charges.