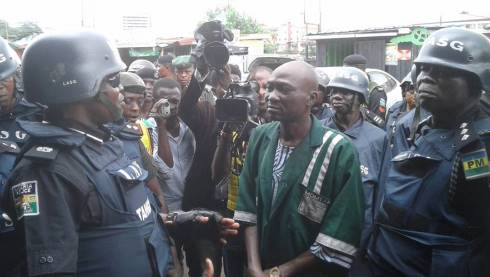 The Lagos State Government today served another 48 hours ‘Abatement Notice’ to all owners of illegal structures and shanties including containerised shops around Obalende to remove them immediately.

Chairman of the Lagos State Task Force SP Olayinka Egbeyemi disclosed that these illegal structures and shanties including containerised shops were directly constructed/placed blocking the free flows of drainages and canals around Obalende thereby causing floods whenever it rains.

He disclosed further that the initial 6-month notice from the government expired recently but the law permitted this new 48 hours ‘Abatement Notice’ to be served before any demolition.

The Chairman stated that perennial flooding experiencing in some parts of the State were not natural but a ‘Man-Made Disaster’ due to carelessness of members of the public by dumping refuse and used tyres into both secondary / primary water channels (canals and drainages).

SP Egbeyemi stated further that the present administration is spending much on infrastructural development which includes clearing of drainages and canals across the State but there is the need for an ‘Attitudinal Change’ from members of the public to support the government in securing the environment.

He implored owners of such illegal structures, shanties and containerised shops around Obalende including under bridges to remove them within 48 hours of this notice or have them demolished by the government.

The Chairman hinted that motor mechanics and all other form of unauthorised commercial activuties within Obalende and its environs were also affected by this notice.

SP Egbeyemi who seeks for a total compliance and maximum cooperation from the people around Obalende however advised miscreants and hoodlums arround the area to relocate outside the State as anyone arrested would be immediately charge to court for prosecutions.