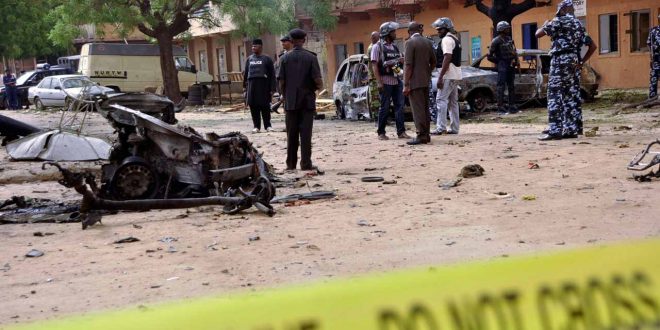 Seventeen persons were killed in multiple suicide attacks in a Maiduguri suburb, the police confirmed on Monday.

The spokesman of the Nigeria Police in Borno State, Victor Isuku, stated in a press release that five female suicide bombers besieged a settlement, Kofa in Konduga local government area of the troubled state, wreaking havoc.

He said the suicide bombers were all lost with twelve other persons in the explosions that also got eleven others injured, at the settlement about eight kilometres from Maiduguri.

The statement read: “Multiple suicide bomb attacks happened yesterday Sunday 18/6/2017, at about 2030hrs, five female suicide bombers detonated IED strapped to their bodies in Kofa community, which is about 8km from Maiduguri town and situated along Maiduguri- Konduga road.

“The first suicide bomber, detonated near a mosque, killing seven persons. The second detonated in a house killing five persons.

“While two other suicide bombers detonated within the same vicinity, killing themselves only.

“A total of seventeen persons including the five suicide bombers died, while eleven persons sustained injuries and were rushed to University of Maiduguri Teaching Hospital.

“EOD team were mobilised to the scene and normalcy has since been restored.”