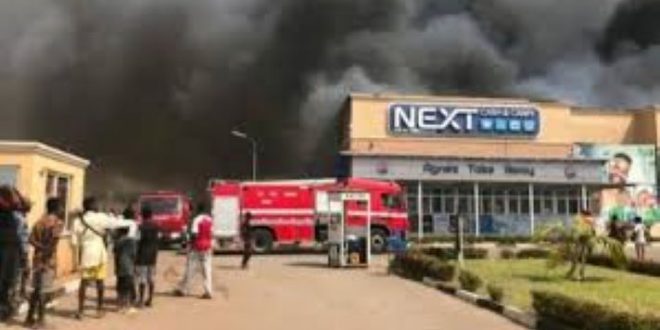 Fire outbreak at NEXT Cash and Carry supermarket caused by electrical surge, hoodlums engaged in looting

The fire outbreak at Next Cash and Carry supermarket in the Jahi area of Abuja was caused by an electrical surge, workers at the supermarket alleged.

Unfortunately, some hoodlums took advantage of the fire outbreak to loot the supermarket alleged to belong to the former governor of Anambra State, Mr. Peter Obi.

According to the workers, the fire started on the first floor of the building around 8 am on Sunday morning.

One of them who spoke to journalists accused the fire service of getting to the scene late.

He said, “The fire started around 8 am. We called the fire service but the firefighters did not arrive on time. We made attempt to put out the fire but we couldn’t find the key to the fire truck stationed at the supermarket. The fire won’t have escalated if they had arrived on time. The fire was caused by an electrical surge.”

The FCT Deputy Commissioner of Police in charge of operations, Ben Igwe, said the police were there to ensure the place is adequately secured.

He added that the place was barricaded to discourage hoodlums from looting the store.

Igwe said the cause of the fire cannot be immediately ascertained.

The FCT fire service, Federal Fire Service, the Fire unit of the Nigerian Navy and Guards brigade, and fire trucks from Julius Berger are still on the ground trying to quench the fire as of the time of filing this report.