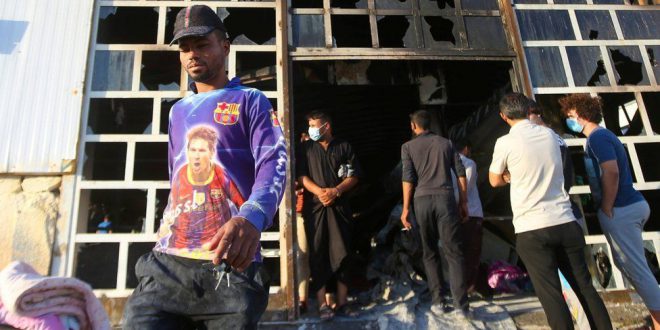 The fire was only contained late on Monday night

The death toll in Iraq’s coronavirus hospital fire in the southern city of Nassiriya has risen to 64, and over 67 people were also injured, state news agency INA said on Tuesday.

The fire which erupted at Imam Al-Hussein Hospital in the Dhi Qar governorate, the capital of Nassiriya, is likely caused by an oxygen tank explosion, health officials said.

“The victims died of burns and the search is continuing,” said Haydar Al-Zamili, and Iraqi health official, adding that there were fears victims could still be trapped inside the building. The ward itself has space for 60 patients.

The interior ministry said in a statement that “civil defense teams are battling a fire accident in the center of Dhi Qar governorate inside Imam Al-Hussein Hospital.”

Iraq’s civil defense said that the fire was completely under control after authorities evacuated the patients, Iraq’s news agency reported.

Maj. Gen. Kazem Salman Buhan said the hospital is made up of “caravans built with flammable sandwich panels,” adding that he “will soon announce a detailed report on the causes of the fire.”

Dhi Qar’s health department has declared a state of emergency in the governorate, and doctors have been ordered on leave to help treat the injured.

Iraqi Prime Minster Mustafa Al-Kadhimi also held an emergency meeting with a number of ministers and security leaders to find out the causes and repercussions of the fire.

Following the meeting, Al-Kadhimi formed a governmental committee to launch a high-level investigation into the causes of the fire, and sent a team of ministers and security officials to immediately head to Dhi Qar to follow up on the procedures on the ground.

He also issued a decision to suspend the directors of the Dhi Qar health department, the hospital, and the civil defense, and detain and subject them to the investigation.

The premier also directed various ministries to send urgent medical and relief aid to the governorate, and ordered to send the wounded who are in critical condition outside Iraq for treatment.

An official day of mourning has also been declared for the victims.

“The catastrophe of Al-Hussein Hospital is clear proof of the failure to protect the lives of Iraqis, and it is time to put an end to this,” wrote Mohamed Al-Halbousi, Iraq’s Parliament Speaker, on Twitter.

Sixteen people have been rescued from the blaze, a medical source said late Monday.

Initial police reports suggested that an oxygen tank explosion inside the hospital’s COVID-19 ward was the likely cause of the fire, a policeman at the scene of the fire said.

Health sources said the death toll could rise as many patients were still missing. Two health workers were among the dead, they said.

In April, a fire caused by an oxygen tank explosion at a COVID-19 hospital in Baghdad took at least 82 lives while 110 people were also injured.

Many of the victims in the April fire were on respirators and were burned or suffocated in the resulting inferno that spread rapidly through the hospital, where dozens of relatives were visiting patients in the intensive care unit.

The April fire sparked widespread anger, resulting in the suspension and subsequent resignation of then health minister Hassan Al-Tamimi.

Already decimated by war and sanctions, Iraq’s health care system has struggled to cope with the coronavirus crisis, which has killed 17,592 people and infected more than 1.438 million.

Dozens of young demonstrators boisterously protested outside the hospital after the deadly blaze.
“The (political) parties have burned us,” they shouted in unison.

Earlier on Monday, a minor fire broke out at the health ministry’s headquarters in Baghdad, but it was quickly contained with no fatalities recorded.