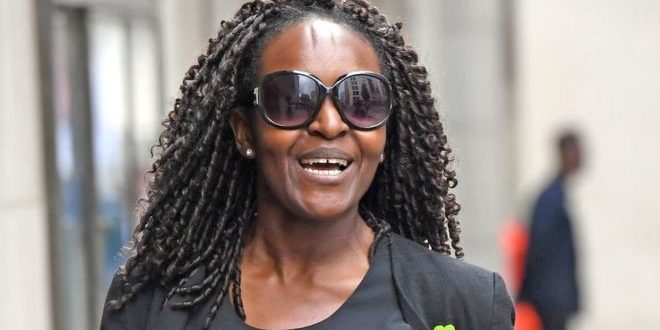 Fiona Onasanya: Disgraced former British Member of Parliament is struck off as a solicitor for lying

A former British Member of Parliament who was jailed for lying about a speeding offence has been struck off as a solicitor.

Fiona Onasanya was sentenced to three months in prison in January after being convicted of perverting the course of justice. She served 28 days. She was clocked doing 41mph in a 30mph zone

The 35-year-old, who subsequently lost her seat as Peterborough MP, had worked in commercial property law.

She was struck off at a disciplinary tribunal which found she had “failed to act with integrity”.

The panel of three people said she failed to “uphold the rule of law and proper administration of justice” and “acted dishonestly”.

She also “failed to behave in a way that maintains the trust the public places in her”, they added.

Ms Onasanya – the first sitting MP since 1991 to be jailed – continued to sit as an MP before she was removed by a recall petition.

She lost an appeal against her conviction in March, but at the Solicitors Disciplinary Tribunal panel she said: “I maintain that I did not do an act tending or intending to pervert the course of public justice.”

Panel chairman Edward Nally said: “That conviction, we are aware, has led to disastrous consequences for Ms Onasanya both personally and professionally.

“As a solicitor there are professional consequences that follow from a proven act of dishonesty that has been found by a jury after trial.”

She was ordered to pay £6,562 costs to the Solicitors Regulation Authority.

The University of Hertfordshire graduate qualified as a solicitor in 2015 and stopped practising in 2017 when she was elected for Labour in Peterborough in 2017, which she represented from 8 June 2017 to 1 May 2019.

Her Old Bailey trial had heard she had denied being behind the wheel when her car was spotted being driven at 41mph in a 30mph zone shortly after her election.

Her brother Festus Onasanya was jailed for 10 months for perverting the course of justice after he falsely filled out her Notice of Intended Prosecution.

Fiona Oluyinka Onasanya is  British of Nigerian origin. She was born August 23, 1983 at Cambridge, United Kingdom. Her parents are Paulina Onasanya and Frank Onasanya