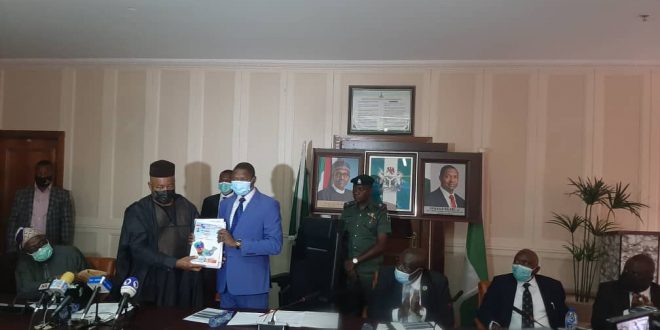 The Federal Ministry of Niger Delta Affairs has presented the much-awaited report of the forensic audit into the Niger Delta Development Commission (NDCC) to the federal government.

Making the presentation to President Muhammadu Buhari through the Attorney General of the Federation and Minister of Justice, Abubakar Malami (SAN), on Thursday, the Minister of Niger Delta Affairs, Senator Godswill Akpabio said the forensic audit found about 13, 700 abandoned projects,

He also stated that about 390 personnel from the army, police, civil defence were deployed in the audit.

The auditors also recommended, among others, the downsizing of the NDDC board as a part-time rather than a full-time appointment, recovery of $4 billion still with oil companies, and review of the NDDC masterplan to make it mandatory for all development projects to be in line with the plan and on a needs basis.

In his remarks, Malami said the audit was set up by the president to ensure accountability in the approximately N6 trillion approved as budgetary allocation to the Niger Delta since the establishment of the Commission.

He added that the federal government was ready to apply the law to remedy the deficiencies highlighted in the audit report with cooperation between the Federal Ministry of Justice and other relevant ministries and agencies.
Share