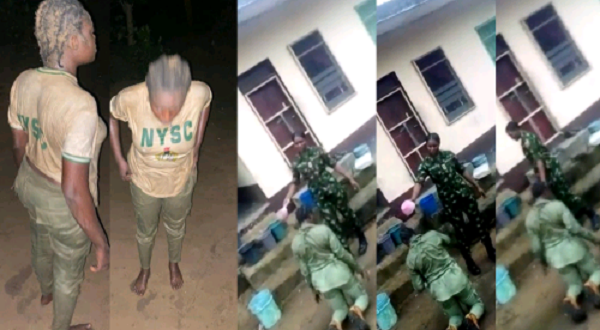 Ifeyinwa Ezeiruaku, the corps member who was assaulted by a female soldier in Calabar, Cross River State, has advised her fellow colleagues to fight for their rights.

Video of Chika Anele, a lieutenant of the Nigerian Army, pouring dirty water on Ezeriaku, whom she later slapped, had sparked an outrage on social media.

The Nigerian Army and the National Youth Service Corps (NYSC) later reacted to the incident.

While the army said the soldier was being investigated, the NYSC relocated the corps member to Lagos where her family is based.

In an interview with Agba Jalingo, a citizen journalist, who drew attention to her plight, Ezeiruaku spoke about how traumatised she felt by the encounter.

“I am thankful to God for leaving Calabar; it has not been easy for me. People have been calling me to say they were seeing my pictures; they asked what happened that I was treated that way,” she said.

When asked if she was intimidated or threatened at any point by the military authorities,  she said no.

She said she was called to the barracks but was not told anything, rather they felt bad over what their colleague did.

“Ever since the incident, I’ve not been myself because I remember what the lady did to me.”