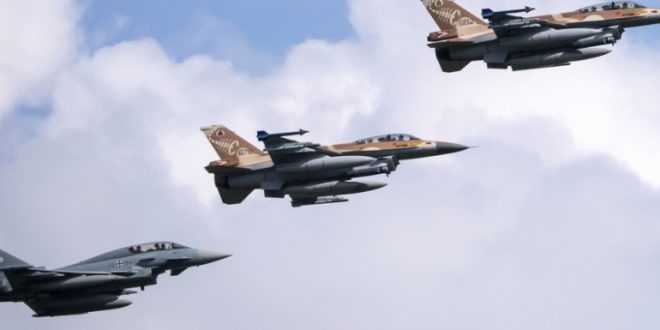 The Israeli airstrikes in eastern Syria were carried out with intelligence provided by the United States, an American official says

The strikes hit the areas of Deir al-Zur and Abu Kamal close to Syria’s border with Iraq. The Syrian Observatory said the strikes targeted 18 sites of pro-Iranian militias.

This is the latest in a series of alleged Israeli attacks on Iranian-backed sites throughout Syria, bringing the total to four rounds of aistrikes within two weeks.

A senior U.S. intelligence official with knowledge of the attack told The Associated Press that the airstrikes were carried out with intelligence provided by the United States and targeted a series of warehouses in Syria that were being used as a part of the pipeline to store and stage Iranian weapons.

The official said the warehouses also served as a pipeline for components that supports Iran’s nuclear program.

“They burnt Iranian positions in Deir el-Zour,” said Omar Abu Laila, a Europe-based activist from Syria’s eastern Deir el-Zour province who runs an activist collective that reports on news in the border area.
Israel has launched hundreds of strikes against Iran-linked military targets in Syria over the years but rarely acknowledges or discusses such operations.
The strikes came amid rising tensions in the region and amid concerns that Iran might carry out attacks to avenge last year’s killing of one of its top commanders, Gen. Qassem Soleimani.
Israel views Iranian entrenchment on its northern frontier as a red line, and it has repeatedly struck Iran-linked facilities and weapons convoys destined for Hezbollah.

On Tuesday, Haaretz’s Amos Harel reported that the Israel Defense Forces, for their part, have been on a high level of defensive alert in recent days.

He added that an aerial defense battery of Patriot missiles was deployed in Eilat, and an exceptionally large presence of fighter planes has been seen in the sky over the country, in all sectors and for a considerable portion of the day.

On January 6, an attack was reported near Al-Kiswah, west of Damascus, not far from the Syrian-Lebanese border. During the preceding 10 days, Arab media reported two additional attacks, one against Syria’s military industrial complex (the Syrian Scientific Studies and Research Center) north of Damascus and one south of the capital, in the northern portion of the Syrian Golan Heights.

On Saturday, a military spokesman said missiles flying over the Golan Heights targeted several locations and air defences downed several missiles.
Meanwhile residents of Beirut in Lebanon reported that Israeli military jets carried out several low flying flights over the Lebanese capital overnight on Sunday.
Israel reportedly regularly violates Lebanon airspace, often to carry out strikes in neighboring Syria, but rarely comments on these reports.
In December 2020, IDF Chief of Staff Lt. Gen. Aviv Kochavi said the missile strikes had “slowed down Iran’s entrenchment in Syria”.
“We have struck over 500 targets this year, on all fronts, in addition to multiple clandestine missions,” Kochavi said in comments published in Israeli media.
Israeli Prime Minister Benjamin Netanyahu and Defense Minister Benny Gantz have repeatedly said Israel will not allow Iranian entrenchment in Syria, vowing to do everything to prevent it.
Share