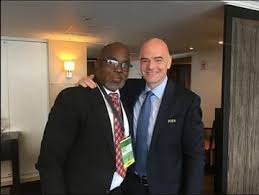 The pointer to this, is the announcement by the Pinnick led Executive Committee on Sunday that the President of the Federation of International Football Associations (FIFA), Gianni Infantino, will visit Nigeria in June.

The  statement, which  was issued in Abuja on Sunday by NFF’s Assistant Director of Communications, Ademola Olajire, stated that “the visit was a fall-out of NFF President, Amaju Pinnick’s recent meeting with Infantino in Mexico”.

The statement said that during the visit, the FIFA president would visit President Muhammadu Buhari and also attend the final of the NFF/ZENITH Bank Future Eagles Championship.

“He will also have an evening with Corporate Nigeria as well as have an interactive session with a horde of African FA Presidents who will also be in Nigeria to receive him,’’ it said.

It added that Infantino believed that Nigeria was a big country and a massive football-playing nation that should help with “the new FIFA leadership’s drive to truly develop the game’’.

“He is excited about our various capacity–building and youth development programs and that is why he is coming to watch the NFF/ZENITH Bank Championship finals,’’ NFF said.

Infantino assumed office as head of world’s football governing body after winning election at an extraordinary general congress in Zurich on Feb. 26, 2016.

It would be recalled that a group led by Chris Giwa is laying claims to the leadership of the NFF. They are hinging their claim on a Jos court judgement which declared the Pinncik led Executive as improperly elected. Other members of the Giwa led Board are Yahaya Adama, Muazu Suleyman, Sani Fema and Effiong Johnson.