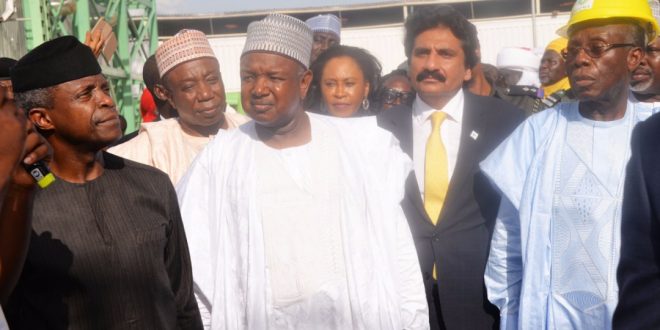 As a demonstration of the determination of the Federal government to ensure that the country achieves self sufficiency in food production, Acting President Yemi Osinbajo on Tuesday August 1st 2017, officially commissioned the state-of-the-art WACOT Rice processing mill in Argungu, Kebbi State.

The Acting President, who was accompanied by the Kebbi state governor, Senator Abubakar Atiku Bagudu and the other 23 members of the Progressive Governors Forum, lauded the contributions of WACOT Ltd to the economic growth of the country through its various agricultural initiatives.

The Acting President further told the dignitaries present that his visit to the Rice Mill is an eloquent demonstration of the importance the President Muhammadu Buhari-led administration places on its vision for food security, job creation and import substitution.

He commended TGI Group, the parent company of WACOT Rice Ltd for establishing the ultra modern, top quality rice processing mill in the country and promised that the Federal Government would continue to intensify efforts in the area of ease of doing business, by creating an enabling environment for businesses to operate and grow. This he believes, will help the private sector and ultimately the Nigerian economy thrive.

His words: “This mill is important for several reasons. Firstly it underscores the policies of the Federal Government that it is the private sector that must be the engine of development. The private sector being the engine of development is not just having the sector grow but the growth must be growth with jobs, the development we are talking about is growth with jobs. We have seen a lot of jobless growth in some sector of the economy with a lot of revenue coming in but with very few jobs.

With this Rice Mill, Several thousands of our farmers have been engaged in farming, this is a growth with job and the Group Managing Director has assured me that in a couple of years, they expect to have engaged 50,000 more farmers. This is the kind of private sector led growth that we want to see”.

Acting President Osinbajo while on a tour of the facility after declaring the factory officially open, saw the heaps of paddy already procured and ready for processing. These were procured from the local farmers through WACOT’s out-grower scheme.

In his welcome address, the Group Managing Director of TGI Group, Mr. Rahul Savara, thanked the Acting President for his visit adding that the company is a strong believer in this administration’s vision of attaining food self-sufficiency and diversification. He noted that the support received from government at all levels has been the source of motivation for the company to keep investing in the Agricultural sector.

“We are grateful that you have joined us on this very special day.  For us, this is a source of encouragement to do more. And Your Excellencies, we assure you that we will do much more”, Savara said.

“The rice mill being the first to be conceived and constructed in this administration, is also the largest parboiled rice mill in Africa. This state-of-the-art rice mill with a capital outlay of over =N= 10 Billion capable of processing over 120,000 metric tonnes of paddy per annum will create over 3,500 direct and indirect jobs. ”

He further revealed that the total investment so far exceeds N10bn, and that the company’s focus covered the entire rice value chain, from seed multiplication to improving farming practices, processing, branding and distribution of the rice, with plans to invest another N100 billion over the next years, in other agricultural value chain items.

He stated that the rice paddy which will be used at the mill will be sourced only from local farmers, as is the business model of the Group’s agricultural operations across Africa. The model which focuses on sustainability has seen the company invest in building farmers’ capacity in good farming practices and business management,through farmers’ business schools, to achieve consistency in quality supply.This initiative will touch a minimum of 50,000 farmers.

“We have trained over 5,000 small-holder rice farmers on good farming practices, financial management, production cost optimization and yield enhancement techniques. We also engage with the farmers through our demonstration farms – working closely with them from seed to yield.”

On quality, Mr. Savara said WACOT Rice has the capacity to produce world class rice that could be compared with those produced anywhere in the world because it has state-of-the-art equipment needed to produce high quality rice.

He used the opportunity to appreciate the effort of the federal government for its various initiatives in support of agriculture through the Central Bank of Nigeria (CBN) which has made it possible for the sector to further make possible the achievement of the food-self sustainability and economic diversification vision. “We believe that Nigeria can and should not only feed itself, but can also export its surplus production to other countries. It has been done before. And there is nothing stopping us from doing it again”, He said.

Charles Igbinidu is a Public Relations practitioner in Lagos, Nigeria
@https://twitter.com/ionigeria
Previous FG Urges Dangote To Complete His Refinery Before Dec 2019
Next No National Identification Number, No Nigerian Passport By 2018