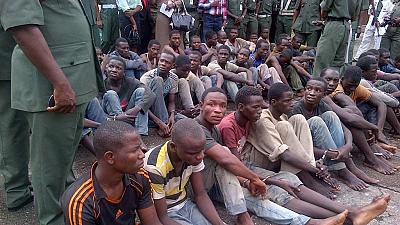 Nigeria on Monday prepared for its first major prosecutions of suspects linked to the Boko Haram conflict in closed-door trials at a military base.

The defendants have all been arrested and detained since the start of the Islamist insurgency in the country’s northeast in 2009.

The justice ministry announced last month that some 1,670 detainees would go on trial at a civilian court at a military base in Kainji, in the central state of Niger.

A further 651 others held at the Giwa barracks in the capital of the northeastern state of Borno, Maiduguri, would then be tried.

A government source involved in the process told AFP from Kainji that defence and prosecution lawyers arrived early to prepare for the cases.

“But from all indications, the whole of today (Monday) will be used for administrative purposes,” he said on condition of anonymity.

“It’s just about sorting out the record of the suspects to determine who is going to stand trial today and those who will be tried later.

“The trials will be conducted on an individual basis. Of course, where some suspects are accused of committing a particular crime, they will be tried in a group.”

The trials have been welcomed as a positive step.

In eight years, only 13 people have been put on trial and just nine convicted, according to the government in Abuja.

But many of the detainees have been held in custody for years without access to a lawyer or ever having appeared before a judge.

The extent of the defendants’ links to the jihadist group, which has killed at least 20,000 people since 2009, is also in question, with the military accused of arbitrary arrests.

There are also concerns about the transparency of the process given the ban on media attendance while government claims the trials will have international observers has been denied.

Boko Haram began life as an Islamic sect and morphed into an IS-affiliated armed movement waging a deadly insurgency that has threatened stability in the impoverished Lake Chad region.

The group, whose name roughly translates from the Hausa language spoken in northern Nigeria as “Western education is forbidden”, aims to create a hardline Islamic state in northeast Nigeria.

Among its many notorious acts was the kidnapping in April 2014 of more than 200 schoolgirls from the town of Chibok, in the northeast state of Borno.