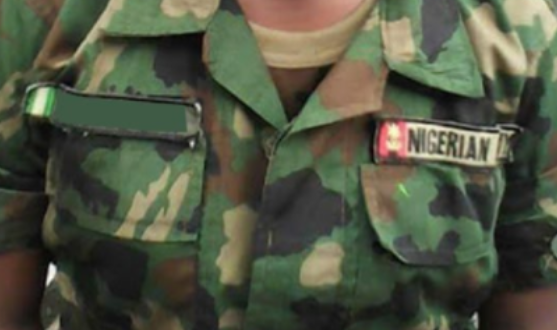 A female soldier attached to the Ngwa High School Forward Operation Base ( FOB )in Abia state has been accused of killing a woman at Osisioma junction leading to the Nigeria National Petroleum Corporation ( NNPC ) depot off Enugu-Aba-Port Harcourt Expressway.

According to reports, the female soldier was having a fight with a truck pusher when she mistakenly fired some shots that hit the woman who died immediately. The deceased was said to be mentally deranged.

The gun which had already being corked by the soldier in an apparent move to scare the truck pusher rented the air and in the process attracted other soldiers to the scene.

The woman because of her mental state couldn’t run to safety when the incident was going on. She was in the process hit by several bullets while the man was dragging the gun with the soldier.

The man was later whisked away into the Ngwa High School base of the Nigerian Army while the body of the dead woman was equally taken alongside with them.” an eyewitness said

Previous Watch How A Woman Set Her Wedding Dress On Fire To Celebrate Her Divorce
Next Two Women Caught Hiding Stolen Meat, Other Items In Their Underwear