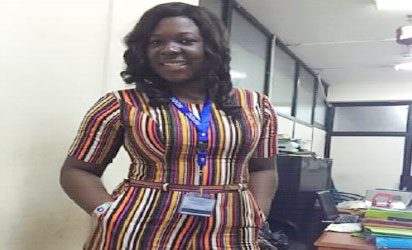 The boyfriend to a female staff of Niger Delta Development Commission, NDDC, Miss Sophia Phillips Horsefall, and two others were, yesterday, arraigned at a Port Harcourt magistrate’s court by Department of State Services, DSS, for stabbing her to death after she had refused to make him, the boyfriend, her next-of-kin to her bank account as well as her refusal to give him one million (N1 million) he had demanded from her.

Counsel to the DSS, Mr C. S. Eze, told the court that the first defendant, Mr. Sotonye Martin, lured the deceased, who he had a 13-year-old daughter for, to the house of the second defendant, Innocent Oluche, where he allegedly stabbed her to death.

He claimed the first and second defendants later buried the deceased in a shallow grave, noting that they invited the third defendant, Wachukwu Ugochukwu, a spiritualist, to perform some rituals.

According to him, the accused were brought before the court on a three-count charge which included “stabbing to death with a jack knife and thereby committed an offence contrary to Section 316 and punishable under Section 319 of the Criminal Code Law, Laws of Rivers State 1999.” The accused did not take plea.

Chief Magistrate F. Alikor referred the casefile to the state Director of Public Prosecution, saying her court did not have jurisdiction to entertain matters over murder which was the second charge. She remanded the accused in prison custody and adjourned the matter indefinitely. Elder brother to the deceased, Mr Amatu Phillips, while speaking to newsmen, alleged that his sister was murdered by the boyfriend of 13 years, Mr. Martin because of her wealth.

He claimed she had some money in her account and confided in the boyfriend who later kept on pestering her for financial support.

According to him, after the sister had allegedly given him money several times, he came again demanding for N1 million which she refused.

He alleged that the boyfriend later lured her to his friend’s house, offered her a fruit juice drink which, unknown to the sister, was drugged.

He alleged that when the boyfriend noticed that she was dizzy from effect of the drug, he stabbed her on the neck, demanding her ATM card and password.

He claimed the boyfriend had before that day persuaded his sister to change the name of her next of kin on her bank details to his name.

Philips said: “When he killed my sister I was not around. He came to my house telling my younger brother that he knew he was going to be a prime suspect when I return. That he is waiting for me, on Thursday he called his friend Oluche and confessed to him that he killed his girlfriend.

“He told his friend that he was being tormented by the ghost of my late sister. So he offered to reward Oluche if he assist him to bury my sister in a shallow grave. According him, he killed my sister on Tuesday night but she was buried on Thursday night.

“Oluche was the first person to confess that he did not kill my sister but only assisted his friend to bury her. The herbalist, Wachukwu also confessed that he was hired to cleanse and padlock the grave as to stop the spirit from disturbing the prime suspect.

“It was when the two suspects have confessed that Sotonye now opened up and said he killed my sister because she refused to give him the money he demanded. That all he wanted was money, despite his confession one of his police brother has been looking for a way to bail him out.”

On how the relationship started between the victim and the prime suspect, Philips said, “ on July 19 she came to Onitsha  to see me in my house and told me about the suspect but I said to her, I don’t like the man, then I ask her to go  that I was going to investigate more about the young man.

“When she told us she was going to marry the man the entire family disagreed with her but she refused our idea against her relationship with the suspect. It was a great opportunity for the suspect to enter her very well, because, at this time she was avoiding us and following the suspect around.

“Before the incident, they paid my sister a huge amount of money in a contract she executed with the NDDC.  When he saw the money he pleaded with her to give him N1million and I heard my sister asking him what he was using all the money she was giving him to do.”