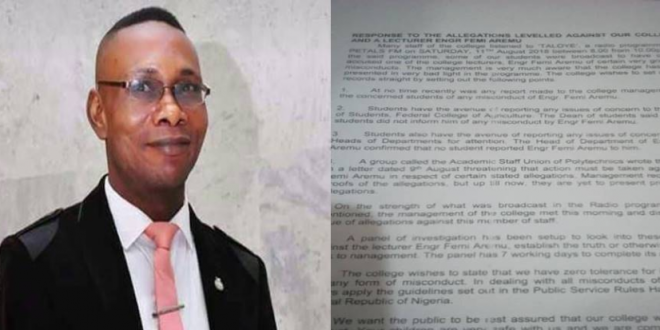 The management of the Federal College of Agriculture aka Moore Plantation Ibadan, Oyo State, has set up a committee to look into the case of alleged sexual harassment levelled against a suspected homosexual lecturer, Engineer Femi Aremu.

The married lecturer was, on Saturday, during a live radio program, accused of sexual harassment and extortion of male students, by a course representative, Lasisi.

He said Aremu is known for always sexually harassing male students and ensuring that, during exams, he searches only male students to enable him check out their privates.

Lasisi, alongside his colleagues, the lecturer and his wife were at Petals FM, Ibadan, during the show; “Taloye” on Saturday. He claimed Aremu told him that he had had his way with over 5 students in the past and his cooperation would determine his success and that of his classmates.

The victim also released an audio tape he recorded during a visit to the lecturer, where he can be heard trying to stop someone he claimed to be Aremu, from perpetrating the sexual act.

In the said audio tape, the person asked Lasisi to be silent, while breathing heavily. Also, another male student confirmed the allegations, saying that the lecturer hates women, but is sexually attracted to men.

The management is now investigating the allegations. A statement released by the school indicates that a panel set up to investigate the matter, will submit its report within 7 working days.

Previous Court Dismisses Murder Case Against Lagos PDP Chairman
Next 2019 Elections: Many Will Vote Buhari Because Of The Rail-lines He Is Building – Adesina