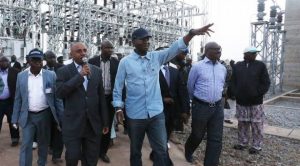 Fashola said this during his visit to Afam Plant in Oyibo local government area of Rivers as part of Federal Government Power Sector Recovery Programme.

According to him, the Afam facility has about 1,000 megawatts of installed capacity.

The plant, he said ,  has underperformed due to years of neglect by previous governments.

“Afam 1 to 5 power plants is currently producing about 100 megawatts which is as a result of failure to maintain the facility over the years.

“We are here to assess the progress of the work we have been doing in the last 17 to 18 months aimed to get the facility back to its optimum capacity.

“The Afam 5 plant is currently being rehabilitated in collaboration with General Electric to restore 240 megawatts to the facility.

“All the turbine and equipment needed for the project are already in the country while the only challenge we are facing is the access road, logistic and few other things that we came to assess.

“We think that we will add 240 megawatts and another 100 megawatts before December with addition of 276 megawatts in 2018 from Afam power plant alone,” he said.

He said the Federal Executive Council approved N701 billion in March with focus to settle the debts through a Power Payment Assurance Programme arrangement with gas companies.

The minister said the federal government was discussing with Shell Petroleum Development Company (SPDC) to separate old debts under the power payment assurance programme initiative that would ensure availability of gas.

“Now that there is a payment assurance programme, we are assuring that every gas that would be supplied to Afam and others would be paid for.

“General Electric has come in to invest in power while we equally want more investors because there is a lot of gas deposit to tap from,” he said.

Fashola said that government had engaged the World Bank and other development partners aimed to successful implementation of the Power Sector Recovery Programme.

He said that the dilapidated Bodo-Bonny road in Rivers was among several road projects that would soon be addressed as soon as budget was signed.