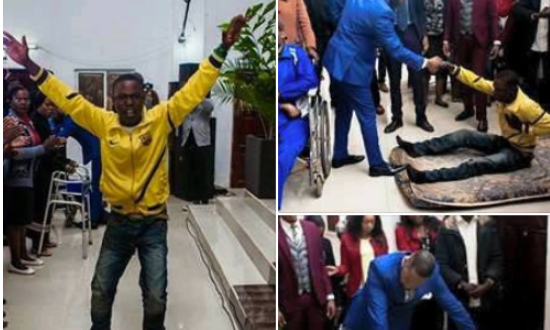 A prophet popularly known as AJ has been summoned by the police after he allegedly brought an unidentified man back to life after having been dead for four days.

The Lusaka based prophet was invited for questioning at the Avondale police station in Zambia.

An eyewitness told the people that Apostle Joshua better known as AJ the Grand-Master during the Sunday church service last week performed a miracle on a man who had been dead for four days.

As shown in the pictures, the prophet laid hands on the dead man and after a few seconds the man “resurrected” coming back to his body and screamed “grand-master” as the rest of the congregation got into high spirits of shock.

A church member also narrated how Apostle Joshua heals people living with the HIV virus every Sunday turning their status to negative with a medical doctor conducting tastes at the backbench of the church. AJ has healed over 500 HIV patients at his church.

Surprisingly, when the man was dead for 4 days, his body was never taken in any mortuary in Lusaka and no one knows who was keeping it apart from the prophet and his spiritual sons, hence the police have called the prophet for questioning.