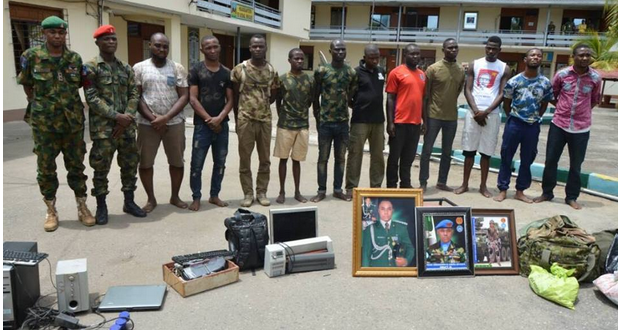 Fake Military Officers Paraded After Their Arrest In Lagos

The General Officer Commanding 81 Division Nigerian Army, Major General Enobong Okon Udoh on Monday 9 April 2018, paraded some impostors and criminals arrested within his Area of Responsibility in Lagos and Ogun states recently. They were paraded at the Headquarters 81 Division.

Parading the impostors and criminals on behalf of the General Officer Commanding was Brigadier General Hamisu Hassan the Chief of Staff of the Division.

As revealed by Brigadier General Hamisu, the impostors were arrested in several parts of Lagos and Ogun states by various Operation CHECKMATE Teams of 81 Division operating clandestinely, while they were carrying out their nefarious activities dressed in different types of Nigeria military uniforms, accessories and other accoutrements.

Also arrested by the indefatigable Operation CHECKMATE Team were criminals who aided and abetted these impostors by making and supplying them with fake military ID cards and the military accoutrements donned by them to perpetrate their nefarious activities.

Some long deserted as well as dismissed personnel of the Services of Armed Forces who impersonated Service personnel of various rank categories are also among those arrested and paraded by the Division. He further revealed that the frequency of occurrence which was indeed very high about two months ago was now on the decrease since the inception of the “Special Operation CHECK MATE” launched by the General Officer Commanding on his assumption of office. 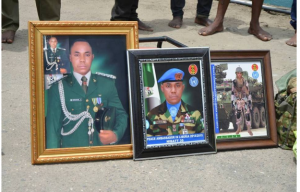 It could be recalled that these criminal impostors are constantly perpetrating criminal activities such as extortion, molestation of innocent citizens, intervening in private disputes between aggrieved parties for pecuniary gains, settlement of land disputes etcetera, which tend to portray the Nigeria Army in particular and the Nigerian Armed Forces in general to the public in bad light as they commit such criminal and illegal activities in military uniform thus giving the false impression of being bona-fide military personnel to their victims and other unsuspecting law – abiding citizens.

In so doing, these criminal impostors cause undue and unfair public opinions and outrage against the Nigerian Army by reason of criminal acts that were clearly perpetrated by them.

The Authorities of 81 Division hereby urges members of the public to always beware of imposters and to always reach out and call the numbers below whenever in doubt or whenever they see persons in uniform engaged in any form of illegality.