Home / News / Politics /  Ezekwesili’s ACPN backs Buhari, accuses her of only interested in being Finance Minister 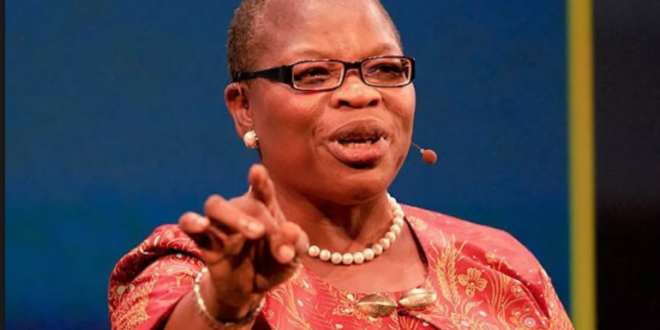 Ezekwesili’s ACPN backs Buhari, accuses her of only interested in being Finance Minister

Dr Obiageli Ezekwesili has lost the support of her Allied Congress Party of Nigeria (ACPN), a reason that may have informed her shocking withdrawal from the presidential race on Thursday morning.

Galadima at a briefing today accused Ezekwesili of using the party for her selfish interest.

Those who addressed the press on behalf of the party were its National Chairman and running mate to Dr Ezekwesili, Alhaji Ganiyu Galadima, National Secretary, Chief Paul Isamede, Deputy National Chairman, South, Otunba Bosun Omosule and his counterpart for the North, Alhaji Ibrahim Goronyo.

Ezekwesili gave hints in her withdrawal notice that she had lost the party, when she mentioned the resistance within over her idea to forge a coalition candidate.

“However, despite resistance from the Allied Congress Party of Nigeria on these and other issues, I have decided that it is now necessary to show by action and example my determination on this issue by stepping down my candidacy so as to focus squarely on building the coalition to a logical conclusion”, she said.

Galadima’s statement showed the party was headed in a different direction, which is backing President Buhari, candidate of the All Progressives Congress.

“She only preempted the decision we would have reached today which was to withdraw her candidacy and give to somebody else.

“Our presidential nomination ticket is N10 million and expression of interest is N500, 000 but when she came she said she did not have money, that she only had N100, 000 and because we wanted to encourage women, we gave her our platform”, said Mr Galadima.

Consequently, the ACPN has declared it’s support for the reelection of President Muhammadu Buhari of the All Progressives Congress APC.

“The reason for calling this press conference is to let the world know about the presidential aspiration of Dr. Oby Ezekwesili, which in actual fact, is not the truth. We have been put into confidence by several of her aides one of which is named lyinoluwa Aboyeji also known as Maureen, that she only wanted to use the platform of the Allied Congress Party of Nigeria ACPN to negotiate to be Nigeria’s Finance minister. This she did not deem fit to inform the party whose mandate she is holding.

“It is on this ground that the Allied Congress Party of Nigeria ACPN is withdrawing support for her presidential aspiration and endorsing the second term bid of President Muhammadu Buhari to take Nigeria to the next level.

“We also seek this medium to inform our former presidential candidate Dr Ezekwesili to return to the party all the property in her possession especially the various donations that she has been receiving from all over the world. Whatever she had received belongs to the party and we must render account to the Independent National Electoral Commission INEC. So, it is mandatory. We are aware of all the accounts she and her aides had opened for this election to which donations were made”, the party declared.

National Secretary, Chief Paul Isamede, on his part said Dr Ezekwesili when confronted on why she was using the platform to raise money, said; “she showed us a piece of paper and said there was $5000 in one account and then in another account, about N35 million in local donations and that if we wanted her to transfer it to the party’s account right away, she would do so. That was over a month ago”.