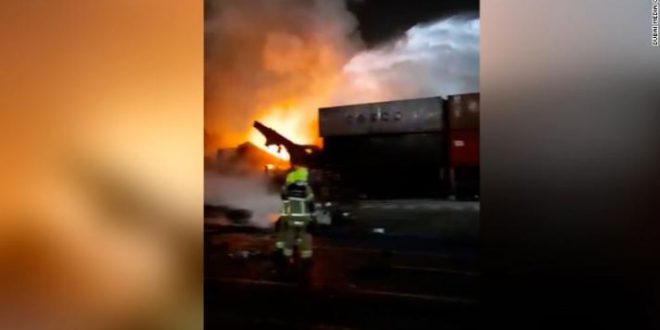 A huge explosion shook buildings in Dubai late on Wednesday with authorities saying there had been a fire onboard a commercial ship anchored off Jebal Ali Port.

Dubai Media Office (DMO) said: “A fire has been reported to have broken out in a container within a ship anchored in Jebel Ali Port. A Dubai Civil Defense team is working to put out the blaze.”

No injuries were reported, the DMO said, adding that the fire had been brought under control.

Dubai authorities told the Saudi-owned Al-Arabiya TV that the crew had evacuated in time and that the fire appeared to have started in one of the containers holding flammable material, without elaborating.

Mona Al-Marri, director general of the Dubai Media Office, told Al-Arabiya the incident “could happen anywhere in the world” and that authorities were investigating the cause.

Dubai authorities did not identify the stricken ship beyond saying it was a small vessel with a capacity of 130 containers.
Ship tracker MarineTraffic showed a fleet of small support vessels surrounding a docked container ship called the Ocean Trader flagged in Comoros.

The Ocean Trader docked at Jebel Ali Port at midday Wednesday. Ship tracking data showed the vessel had been sailing up and down the coast of the UAE since April. The United Nations ship database identified the vessel’s owners as Sash Shipping corporation. Sash and Inzu Ship Charter did not immediately respond to request for comment.

A video posted by the website Lovin Dubai filmed from an apartment tower showed a fireball leaping into the nightsky.

A Dubai official told Al Arabiya that the fire was the result of an accident inside a container that contained flammable materials.

The combustion unleashed a shock wave through the city of Dubai, causing walls and windows to shake in neighborhoods as far as 25 kilometers away from the port.

A worker at the port said he heard an enormous explosion that made his ears ring and then the area became thick with smoke.
He said the fire had been put out quickly.

A fire caused by an explosion within a container on board a ship at Jebel Ali Port has been brought under control; no casualities have been reported. pic.twitter.com/oMTaJhgEYd

Social media images showed fire crews dealing with the aftermath of the explosion.

Some 2.5 hours after the blast, Dubai’s civil defense teams said they had brought the fire under control and started the “cooling process.”

Authorities posted footage on social media of firefighters dousing giant shipping containers.
Jebel Ali Free Zone attracts nearly a quarter of foreign direct investment to Dubai, with more than 8,000 companies having established operations in the commercial zone since its inception in the mid-1980s, according to its website.

Jebel Ali sits on the eastern side of the Arabian Peninsula and is also the busiest port of call for American warships outside the US.