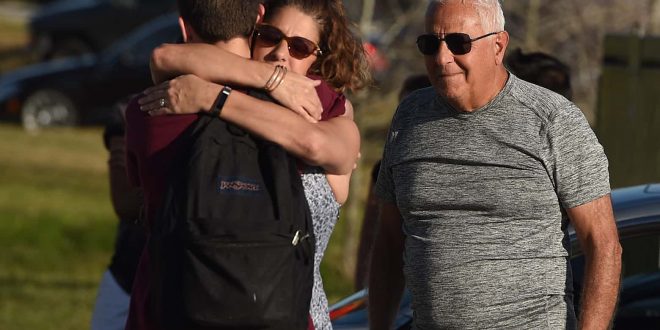 An American nightmare unfolded Wednesday afternoon at a South Florida high school after police say an expelled teenager returned to campus and opened fire with an assault rifle, killing 17 and wounding 15 more in the worst school shooting in Florida history.

Just before dismissal at Marjory Stoneman Douglas High School in Parkland, thousands of students puzzled at the sound of a fire alarm were launched into a panic when gunfire punctuated the din. As teachers and students fled through hallways and hid under desks, a gunman opened fire, leaving a trail of bodies and stunned confusion in his wake.

The gunman, Nikolas Cruz, 19, walked the halls of the high school wielding an AR-15 and equipped with multiple magazines. U.S. Sen. Bill Nelson of Florida told reporters that Cruz pulled a fire alarm and then, wearing a gas mask, began tossing smoke bombs and shooting people as they ran through the haze.

Police say Cruz gunned down a dozen people inside buildings on the school’s sprawling campus, two more on the grounds, and one more on the corner of Pine Island Road as he fled. Two more died at the hospital. Many underwent surgery at Broward Health hospitals.

The Broward Sheriff’s Office says the school, home to about 3,200 students, had been cleared by early evening. They did not identify any victims.

“It’s a day that you pray, every day when you get up, that you will never have to see. It is in front of us. I ask the community for prayers and their support for the children and their families,” Schools Superintendent Robert Runcie, appearing at a media staging area near the school, told WSVN-TV. “Potentially there could have been signs out there. But we didn’t have any warning or phone calls or threats that were made.”

The shooter, identified by Sheriff Scott Israel as Cruz, managed to make it off campus before he was cornered and taken into custody near the community entrance to Pelican Pointe at Wyndham Lakes in Coral Springs. He was transported to Broward Health North, and then sped away from the hospital in a police escort.