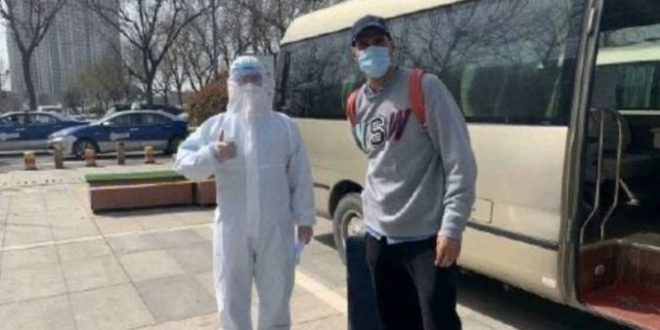 Former Manchester United midfielder Marouane Fellaini is the latest footballer to be struck down by coronavirus.

According to a local health department in the Chinese city of Jinan, a recent test taken by Fellaini has returned positive for the virus which has swept across the globe.

The 32-year-old currently plies his trade in the Chinese Super League for Shandong Luneng and he tested positive for coronavirus on Friday after taking a train to Jinan.

He had returned to China on Friday having spent several weeks in Dubai.

CSL players were sent abroad en masse to escape the coronavirus after its outbreak in China late last year. But given the recent dramatic reduction in reported new Covid-19 cases in China, players are starting to return to the country.

Fellaini was due to spend 14 days in quarantine anyway, as are all people entering the country.

According to Shandong Luneng’s website, the Belgium midfielder is showing no symptoms of the coronavirus, such as a fever or cough, but tested positive after a routine screening on his return to China.

He is now in isolation at Jinan hospital, which specialises in infectious diseases, according to reports in Chinese media.

Fellaini, who spent 11 years playing in England, representing both Everton and United, is reportedly the only Chinese Super League player to have contracted the illness.

A statement on Fellaini from Shandong Luneng read: ‘The club will do its best to protect everyone while helping the treatment and rehabilitation of its player. We wish him a quick recovery. Fellaini expressed his gratitude to his concerned fans and friends through the club. He believes he will get well soon and return stronger.’

The CSL is currently suspended due to the pandemic, as are most other leagues around the world. There had been hope, however, that is would resume in the next month.

Covid-19 originated in China but the country has seen a dramatic decrease in cases over the past month, with just one new case reported in the last four days. Europe is now classed as the epicentre of the pandemic, and Italy is the worst-hit country in the world.

He signed an eye-watering £235,000-a-week deal with the CSL side and enjoyed a stellar first campaign as he netted 13 times in all competitions.