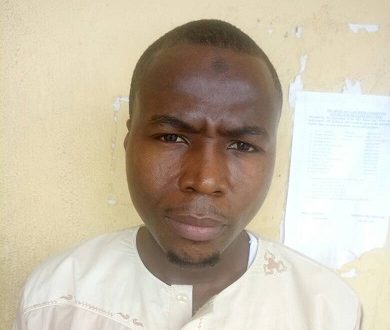 The Economic and Financial Crimes Commission (EFCC) on June 19, 2017 arraigned one Sulaiman Musa, before Justice Ohimai Ovbiagele of the Edo State High court sitting in

Benin on a 4 count charge bordering on intent to defraud, Stealing and conspiracy to commit felony contrary to Section 467 of the Criminal Code csp C21 ,Vol.1 laws of Edo State of Nigeria, 2006 Musa a  former staff of Dangote Cement Plc was said to have sometime in January2017  in  Benin conspired with one Mustapha (still at large) and one Muhammed (still at

large) to steal 900 bags of cement , and rims valued at over N4million.

One of the charges reads:” that you Sulaiman Musa , one Mustapha ( still at large)and one Mohammed ( still at large) sometime in January 2017 in Benin within the jurisdiction of this Honorable  court , with the intent to defraud stole a trailer load of  cement valued at N2, 001,500.00, property of Dangote Cement Plc”.

When the charges were read to him, he pleaded not guilty. Consequently, the prosecution counsel Murtala Saidu Usman asked the court to fix a date for trial and to remand the

However, the defense pleaded with the court to grant his clients bail as he has been on administrative bail.