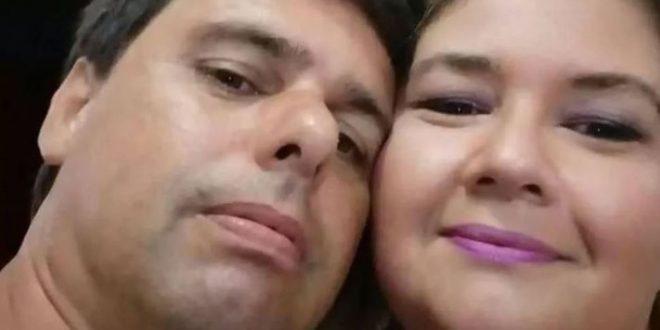 Sergio Ricardo Mota and Simone Koszegi were sentenced to more than 34 years in prison for the death of Atyla Arruda Barbosa, 20, in July 2018, in Brazil. (Image: Newsflash)

A ‘Satanist’ couple sacrificed a pregnant woman in the hope of getting an insurance payout.

Sergio Ricardo Mota and Simone Melo Koszegi were arrested for killing Atyla Arruda Barbosa, 20, in Mongagua in the south-eastern Brazilian state of Sao Paulo in 2018.

The couple were sentenced to 34 years in prison for killing the woman the man had made pregnant and trying to cash in an insurance claim in her name for his loss.

It is believed they murdered the safety technician, who was the mother of his unborn child, to cash in on an insurance payout of 260,000 Brazilian real or £36,125.

According to the evidence presented to the court, the two were part of a Satanic sect and “worshipped Lucifer”.

They lured the victim through social media and promised her a better life through a pact with ‘Lucifer’.

The young victim was originally believed to have drowned off a beach in Mongagua in July 2018. She was pregnant at the time.

However, the hypothesis changed when the couple tried to take out a life insurance policy worth the amount previously stated in her name.

Sergio Ricardo Mota, who with Simone Koszegi were sentenced to more than 34 years in prison for the death of Atyla Arruda Barbosa, 20, in July 2018 ( Image: Newsflash)

A post-mortem examination revealed Atyla had been murdered and that her unborn child was Sergio’s.

The couple had tried to pass her death off as drowning and even held a funeral for her and got the declaration “I love you” engraved on her tombstone to try to throw the police off the scent.

Atyla had been living with the couple in the nearby city of Itanhaem.

She was invited there from her home in the west-central state of Goias with the promise of a job at the couple’s local transport company.

Police said the couple were involved in black magic and Satanism and believed Atyla was also linked to the sect.

Sergio Ricardo Mota and Simone Koszegi are believed to have offered Atyla’s unborn child as a sacrifice( Image: Newsflash)

They believe she may have at one point agreed to offer up her unborn child as a ritual sacrifice, but when she changed her mind and try to get out of the deal, she was killed.

The couple were sentenced to 34 years and eight months in prison for homicide on Thursday.

The decision is subject to appeal.