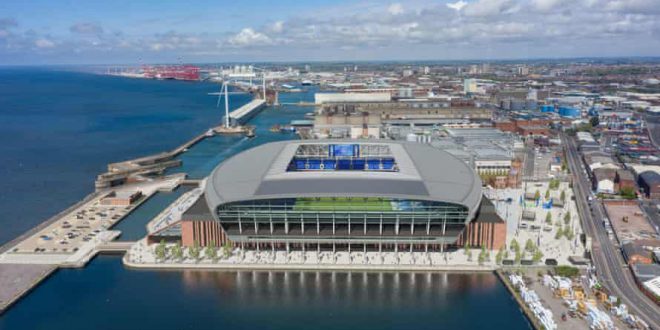 Everton’s proposals for a new stadium at Bramley-Moore Dock have been granted planning permission by Liverpool City Council.

The council’s planning committee all voted in favour of the scheme in a virtual meeting this morning, concluding that the benefits of the 53,000-seat stadium outweighed any potential harm to its grade II-listed site at Bramley-Moore Dock on the banks of the river Mersey.

The decision is a breakthrough for the Toffee’s new ground and follows the council’s decision to push back the vote on the proposals in December last year because of council staff having to work from home during the covid-19 pandemic.

The size of the planning application – one of the largest ever received by the council – was also said to have contributed to the delay because of the volume of paperwork involved in the planning process.

The final decision on whether the stadium will be built is now in the hands of the secretary of state, Robert Jenrick, who has a 21-day deadline to respond.

But a spokesperson for Liverpool council told Building that it is expected that Jenrick will waive the deadline and ask for a holding position due to the size of the scheme.

If given the all-clear, it is expected that main contractor Laing O’Rourke will begin construction later this year with Everton hoping to host games at the stadium in 2024.

The club, which saw off Liverpool in a 2 – 0 victory in the derby at the weekend, has been at its current stadium Goodison Park since 1892.

The new stadium has been designed by US architect Dan Meis with engineering consultant Buro Happold and technical architect Pattern also on the project team.