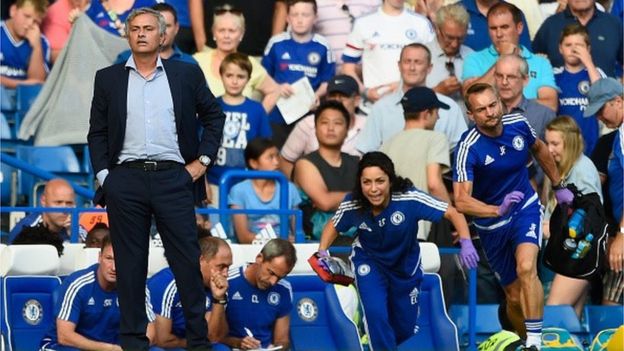 Dr Carneiro is claiming constructive dismissal against the football club.

She is also bringing a separate legal action against Jose Mourinho, who left Chelsea in December, for alleged victimisation and discrimination.

Dr Carneiro’s lawyer said the former Chelsea manager would face at least one day of questions at the hearing.

The case is anticipated to be heard over seven to 10 days at the London South Employment Tribunal in Croydon.

Dr Carneiro’s barrister Mary O’Rourke QC told the hearing she is likely to take at least a day to cross-examine Mr Mourinho – now manager of Manchester United – who did not attend the first day of the case.

The tribunal was adjourned until 14:00 BST on Tuesday.

Legal papers submitted to the tribunal on behalf of Chelsea FC and Mr Mourinho showed Dr Carneiro had been “made an open offer of £1.2m to settle her claims”.

The football club’s legal team said it would show the club had taken these steps only because it believed that it was “in no-one’s interests that this dispute should be determined through litigation”.

“They are conscious that, whatever the facts of the matter, it is likely to be widely and incorrectly assumed that they could have avoided this coming tribunal,” Chelsea’s legal team added.

Dr Carneiro was criticised by the Portuguese and dropped from first-team duties after she went on to the pitch to treat Eden Hazard during Chelsea’s opening Premier League game of the 2015-16 season against Swansea.

It meant that Chelsea were temporarily reduced to playing with nine men, which Mr Mourinho claimed had contributed to the resulting draw.

Dr Carneiro did not appear on the bench again for first-team duties and left the club soon after.

But Chelsea’s legal team argued that documents at the time showed Dr Carneiro did not consider Mr Mourinho’s actions to be discriminatory.

“The purpose of the discrimination claim was to lift the statutory cap, in order to justify the claimant’s extravagant compensation claim,” the legal team argued.