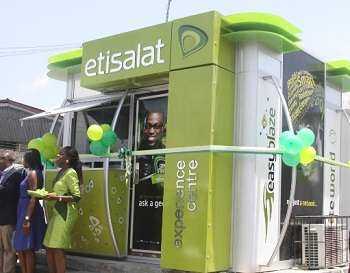 Etisalat in N377b debt crisis; pleads for renegotiation of terms with 13 banks

The Nigerian affiliate of Abu Dhabi-listed telecoms company Etisalat is in talks with 13 Nigerian banks to renegotiate the terms of a $1.2 billion loan it took out four years ago after missing a payment.

At current official rate, the loan, without interest stands at N377 billion.

Ibrahim Dikko, vice president for regulatory affairs at Etisalat Nigeria, said Etisalat missed payments due to the economic downturn in Nigeria, a currency devaluation and dollar shortages on the country’s interbank market.

“We are in discussions with our bankers and have been for quite a while. They have not taken over the business and we are hoping that we can resolve the issue and find a way to renegotiate terms,” Dikko told Reuters.

Emirates Telecommunications Group (Etisalat) owns a 40 percent stake in its Nigerian affiliate, which accounted for around 3.7 percent of the group’s revenue in 2013.

Etisalat Nigeria signed a $1.2 billion medium-term facility with 13 Nigerian banks in 2013, which it used to refinance an existing $650 million loan and fund a modernisation of its network.

Dikko said the business performed well last year and it was still in profit at the level of earnings before interest, tax, depreciation and amortisation, while loan repayments had been up to date “until recently”.

He said that the company was now looking at “all the options”, which could include converting the loan into naira, but did not want to anticipate the outcome of talks with the lenders.

A banking source said Etisalat Nigeria had given notice to Nigerian lenders that it would miss a payment in February which triggered a debt discussion, adding that they were yet to agree on terms.

“We want to see more skin in the game from the foreign parent. They also have a shareholder loan we want them to convert into equity which would put less pressure on cash flow and its receivables,” the banker said.

The source said lenders wanted Etisalat to increase its stake in its Nigerian affiliate in order to reduce the risk of the company pulling out of the country due to the debt issue.

Several other firms took out dollar loans in 2013 to expand at a time Nigeria was seen as an attractive investment prospect. Its economy was growing at 7 percent with a stable currency and oil prices were rising.

But now the country has been running short of dollars as oil revenues have fallen along with the price of crude, pushing the economy into its first recession in a quarter of a century. That has weakened the naira which trades at a lower level on the black market than the official interbank rate versus the dollar.

The dollar shortages have made it difficult for local companies to get access to foreign currency and as a result some have struggled to repay dollar-denominated debts with several lenders having restructured loans to oil firms.