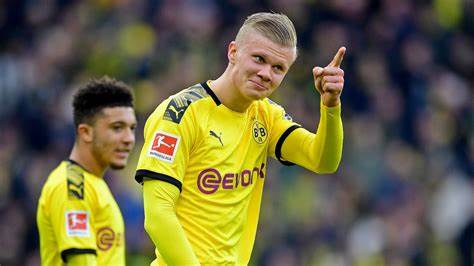 Manchester City have won the race to sign Erling Haaland – in a stunning overall package worth in excess of £200million.

City have officially triggered the £63million release clause in Haaland’s Borussia Dortmund contract, to beat Champions League conquerers Real Madrid to sign Europe’s most prolific young striker. Haaland will be one of City’s top earners on a basic salary of £400,000-a-week after agreeing personal terms, putting him on a par with Kevin De Bruyne and ahead of Raheem Sterling and Jack Grealish.

The 21-year-old will sign a five-year deal, which will earn him a whopping £104m, with add-ons and performance-related clauses set to take City’s overall outlay on Haaland through the £200m barrier. After Haaland opted for City over Real and personal terms were agreed, the reigning Premier League champions notified Dortmund of their intention to trigger the 21-year-old’s release clause.

Haaland is understood to have taken and passed a medical yesterday, with the forward keen for the deal to be made public as soon as possible, so he can say a formal farewell to Dortmund fans before the end of the season.

Given City are getting £180m-rated Haaland for around a third of his market value, they have agreed to make him one of their highest earners, despite his age and relative inexperience, with the potential to become their biggest earner if he hits certain clauses to trigger bonuses.

City moved for Haaland after failing to land Tottenham striker Harry Kane last summer, with Spurs wanting around £150m for the England captain.

Haaland and his father, former City and Leeds midfielder Alf-Inge, assessed all of his options for the next stage of his phenomenal career and were ultimately swayed by Pep Guardiola and his style of play.

They felt Guardiola’s style not only best suited Haaland’s own way of playing, but that the club also represented his best chance of sustained success in what will arguably be the peak years of his career.

Norway striker Haaland began his career at Norwegian clubs Bryne and Molde, then spent a year at Austria’s Red Bull Salzburg, before joining Dortmund in January 2020.

Haaland has plundered a remarkable 85 goals in 88 appearances for Dortmund and had the pick of Europe’s top clubs for his next move, but opted for City, where he will spearhead the attack.