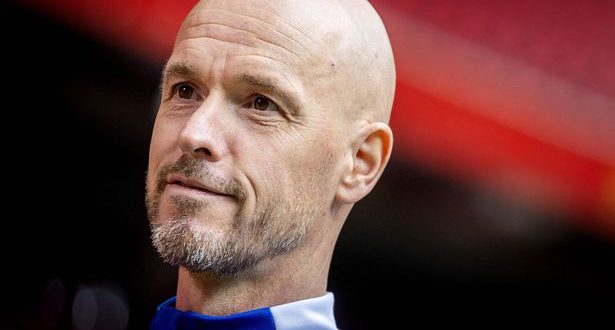 Erik ten Hag wants to sign Tyrell Malacia – the Feyenoord defender described as a “pitbull” by fans in Holland.

The incoming Manchester United manager has targeted Malacia after failing with a move to take the 22-year-old Dutch international left-back to Ajax last summer. Rotterdam-born Malacia is comfortable on the ball, possesses blistering pace – and has a tackle so tenacious that he has become a cult hero at the club he joined as a nine-year-old schoolboy.

He was watched by a posse of scouts – including representatives of United and Lyon – as he produced an outstanding performance as Feyenoord beat Marseille 3-2 in the first leg of the Europa Conference semi-finals on Thursday night. Ten Hag was unable to sign Malacia last summer due to the huge rivalry Ajax have with Feyenoord.

But a £20million offer will tempt the Dutch club into selling to United after two financially tough years following the pandemic. Malacia fits the profile of the kind of hungry, young player that Ten Hag has been an expert in developing.

He has just broken into Louis van Gaal’s Holland squad and is set to go to the World Cup in Qatar next winter. Ten Hag has already identified the full-back positions as a problem area at his new club.

But when United’s attempt to hijack Bayern Munich’s bid to sign Noussair Mazraoui on a free from Ajax this summer, the Dutchman was given a reality check about how his new club’s pulling power has lost some of its potency.

United fear they will lose out on Mazraoui after failing to convince the Moroccan full-back that he could realise his ambitions in Manchester rather than Munich. The 24-year-old is out of contract in the summer and United were prepared to offer him a more lucrative contract than Bayern.

But Mazraoui has made it clear that the promise of competing for the Bundesliga title and playing in the Premier League makes the German club a more attractive proposition. United are prepared to sell right-back Aaron Wan-Bissaka just three years after paying Crystal Palace £50million for the former England Under-21 international.

The fear is that Wan-Bissaka does not suit Ten Hag’s style, which relies heavily on full-backs building play from the back. Ten Hag is ready to go Dutch in a big way after being tasked with a major rebuild at Old Trafford.

Sunday Mirror Sport revealed last month that he has targeted Ajax pair Jurrien Timber and Antony. But the Amsterdam club are reluctant to do business with United after already losing their manager.

United refused Ajax’s request to enter an agreement not to raid the Dutch club for players when they were negotiating the terms of Ten Hag’s departure. There is set to be a raft of departures from Old Trafford once Ten Hag takes over and he will be handed a £100million-plus transfer budget as well as any cash raised in the market.

But one of the big attractions of appointing Ten Hag is his ability to identify young talent who won’t cost a fortune. He has already been given full backing by the United board to move on any players who refuse to bend to his methods.