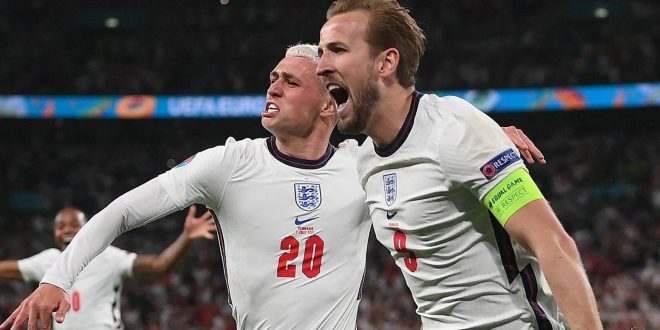 England’s 55-year wait to reach a major men’s final is over at last after victory against Denmark in the Euro 2020 last four, on a night of nerve-shredding tension then unconfined joy at Wembley.

Gareth Southgate’s side were on a mission to travel one step further than any England side has done since the 1966 World Cup final win against West Germany and they finally achieved the long-cherished goal as they came from behind to beat Denmark after extra time.

In front of 66,000 fans and in a frenzied, thunderous atmosphere this newer Wembley has not experienced before, England battled their way out of adversity to secure a meeting with Italy in the Euro 2020 final at the same venue on Sunday (20:00 BST kick-off).

How England had to fight for victory against this steely Denmark with an inspired keeper in Kasper Schmeichel, especially after conceding their first goal of the tournament to Mikkel Damsgaard’s stunning free-kick after 30 minutes.

Schmeichel was Denmark’s hero as England sought the winner, saving brilliantly from Harry Maguire and Harry Kane as the game went into extra time and the prospect of penalties loomed large. The moment the nation has waited for so long effectively arrived with Wembley’s giant screens showing 103 minutes and captain Kane standing over a penalty after Raheem Sterling had been fouled by Joakim Maehle.

In keeping with England’s long and tortuous history, it was not straightforward as the normally ice-cool Kane saw an awful penalty saved by Schmeichel – but the rebound fell at his feet for him to score.

Wembley went wild with deafening noise and wild celebrations as finally, after all the years of hurt, England have the golden opportunity to finally claim a major crown on Sunday.

England answered two of the most crucial questions surrounding Southgate and his team on an unforgettable night at Wembley.

For all the promise and progress since the bitter disappointment of defeat in the World Cup semi-finals in Moscow in 2018, England and Southgate needed to prove they could overcome what has proved to be an insurmountable hurdle for both themselves and their predecessors after they also came up short in the last four at the Italia 90 World Cup and at Euro 96.

This was the acid test – at least before Sunday’s final with formidable Italy – and they came up with the goods not only in the context of Euro 2020 but also in demonstrating their character and big match mentality.

England went into this semi-final on a wave of expectation and optimism after the last-16 victory against Germany at Wembley was followed up by the emphatic 4-0 demolition of Ukraine in the quarter-final in Rome.

And they faced a test of their nerve when they fell behind to this excellent Danish side, Damsgaard’s free-kick the first goal keeper Jordan Pickford had conceded in 721 minutes for England.

England were ragged at this point but the response was full of conviction, equalising swiftly then taking control before the tiring Danes and the magnificent Schmeichel were finally overcome with Kane’s fortuitous winner.

Southgate’s team has crossed a barrier no England team has made it beyond since Sir Alf Ramsey’s World Cup winners – now we wait to see if it will give them the confidence and belief to clear the final hurdle against Italy on Sunday.

As Southgate will have demanded of them, England’s big players made their impact when it mattered most on a night when failure would have been hard to bear.

Kane, who struggled to get into Euro 2020 during the group stage, rode his luck to score his fourth and most important goal of the tournament after his missed penalty, but his performance was full of energy and menace.

He is back to his best and how England will need that against the two great Italian central defensive warriors Giorgio Chiellini and Leonardo Bonucci, who have a quality and street-wisdom reflected in their combined total of 70 years.

Sterling continued his superb tournament, reflected in the run that earned England’s match-winning penalty, hitting at the heart of Denmark’s outstanding defence until he finally drew the crucial mistake.

And Manchester United captain Harry Maguire, an injury doubt who did not even make the start of the tournament, is now back in the role where Southgate wants him, as defensive leader, powerhouse and ever-present set-piece danger at one end and blockade at the other.

Once the euphoria has died down and England’s heroes clear their heads, they must go above and beyond the call of duty once more against Italy on Sunday.

Pickford’s record – the best of the stats

Charles Igbinidu is a Public Relations practitioner in Lagos, Nigeria
@https://twitter.com/ionigeria
Previous Two men are arrested, detained for over 45 days in India for saying cow urine and dung do NOT cure Covid-19
Next Hours After Haiti’s President Is Assassinated, 4 Suspects Are Killed and 2 Arrested