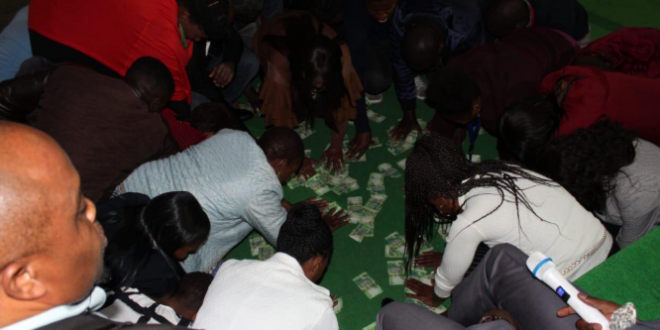 End Of The World? Congregation Scramble As Prophet Vomits Money Of Different Currencies During Church Service In South Africa

Hundreds of South African left scrambling to pick monies which were coming out from the mouth of Prophet Anointed CFM during his service on Sunday.

The Prophet who told the congregation that he carries his millions inside his tummy immediately started vomiting monies of different currencies while the congregants scrambled to pick up the notes.

According to a post on his Instagram page @Officialseer1 and his Facebook page @Prophet Anointed CFM, one of the young man that picked up one of the Notes he vomited played Lotto on Monday after picking up the money and won 13.000.000 million rands.

Many have described this act as magic while others have since called for the arrest of Seer1 for money laundering.