Home / Uncategorized / Emir of Ilorin thanks Buhari for appointing his younger sibling, Prof. Gambari as Chief of staff

Although, the appointment is not yet confirmed by the presidency but the Emir of Ilorin and Chairman, Kwara State Council of Chiefs, Mai-Martaba Alhaji Ibrahim Sulu-Gambari, has expressed gratitude to President Muhammadu Buhari for appointing Professor Ibrahim Gambari as his new Chief of Staff.

The Emir of Ilorin is an elder brother to Professor Gambari.

Alhaji Sulu-Gambari in a statement signed by his Media Aide, Mallam Abdulazeez Arowona described the appointment as a great honour to the entire people of Ilorin Emirate and Kwarans at large.

However, the presidency is yet to confirm the appointment. The president’s media aides and officials from the office of Secretary to the Government of the Federation, declined comment on the said appointment. They asked our reporters to wait for an official statement.

It was however gathered that Prof. Gambari will be formally unveiled during the virtual meeting of the federal executive council (FEC) on Wednesday.

Charles Igbinidu is a Public Relations practitioner in Lagos, Nigeria
@https://twitter.com/ionigeria
Previous More than HALF of COVID-19 patients caught the virus from someone who was not showing any symptoms, study finds
Next Ibrahim Gambari arrives the Presidential Villa, Abuja. 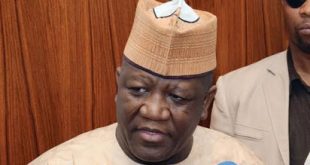