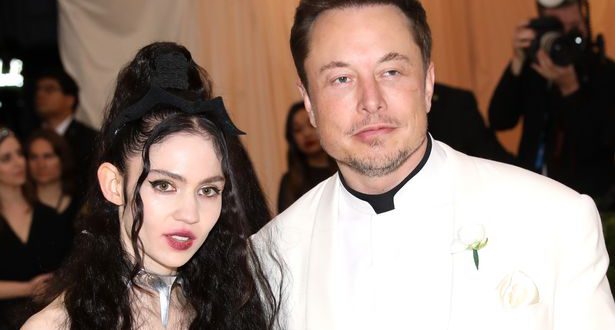 Elon Musk and singer Grimes have split after three years together.

However, the two are co-parenting and are on “great terms”.

“We are semi-separated but still love each other, see each other frequently and are on great terms,” Elon revealed to Page Six.

“It’s mostly that my work at SpaceX and Tesla requires me to be primarily in Texas or travelling overseas and her work is primarily in LA. She’s staying with me now and Baby X is in the adjacent room.”

They were last publicly seen together at the Met Gala. Grimes appeared on the red carpet alone, but Elon joined her inside.

Tesla CEO Elon and his former partner welcomed their baby last year, with Elon taking to Twitter to share the happy news.

Elon tweeted: “Mom & baby all good,” and later when asked if he was the father of a “girl or boy”, replied: “boy”.

The couple shocked fans when their son’s name was announced, with many wondering how to pronounce X Æ A-12. However, they later changed his name to X AE A-XII (with no special characters) to comply with the law.

According to TMZ, a supervisor at the Department of Public Health Vital Records Office said they would not be able to legally put the name on the birth certificate because Californian law doesn’t permit symbols or numbers.

When she was pregnant, Grimes admitted she didn’t see people’s fascination with her relationship with Elon.

“I just did not understand what I was getting into at all. Not that I’m mad about it. I just didn’t think it would be a thing. The s**t that’s happened with my boyfriend this year has overwritten so much of my life’s work,” she told Rolling Stone magazine.

The two started dating in 2018

Over a year later, Grimes revealed that her son doesn’t call her ‘mum’ and has been calling her by her real name Claire.

She explained how having a baby was “a big rebirth” for her but she has a “distaste” for the word mother.

“I think having a baby was a big rebirth for me artistically. Being a mother feels weird for me to say,” she told Vogue magazine.

“X says Claire, but he doesn’t say ‘mama’… like, maybe he can sense my distaste for the word ‘mother.’

“I don’t even know why I have a distaste for it, I respect it … I just can’t identify with it, weirdly.”

Musk was previously married to author Justine Wilson, with whom he has five sons: twins Griffin and Xavier, 17, and triplets Damian, Saxon and Kai, 15.

The billionaire also dated Amber Heard from 2017 to 2018 following her ill-fated marriage to Johnny Depp.

Charles Igbinidu is a Public Relations practitioner in Lagos, Nigeria
@https://twitter.com/ionigeria
Previous Conte is NOT interested in the Arsenal job should Arteta be fired would only accept Man Utd – Report
Next CNN’s Anderson Cooper reveals that his Mom Gloria Vanderbilt offered to be to be his surrogate at 85