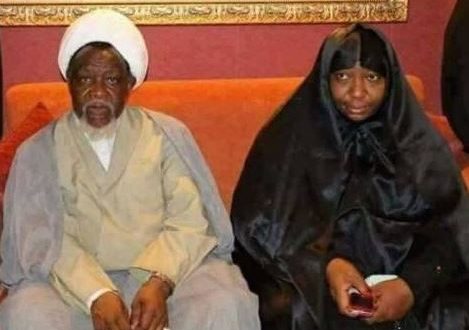 El-Zakzaky, wife arrive Abuja airport on their way to India for treatment

Leader of the Islamic Movement in Nigeria, Sheikh Ibrahim El-Zakzaky and his wife, Zeenat  will in the next few hours depart the Nnamdi Azikiwe International Airport, Abuja, to India for medical treatment.

This is in conformity with the order of the Kaduna State High court granting El-Zakzaky and his wife leave to undergo treatment at an Indian hospital of their choice.

The order came after the couple had spent over three years in custody.

The court had ordered that they should be released by the Department of State Services to go for treatment and return for the continuation of their trial after their discharge from the hospital.

Already, El-Zakzaky and his wife, Zeenat, have arrived at the airport in preparation for their flight to Medenta Hospital, New Delhi, India for medical treatment.

The IMN Spokesman, Ibrahim Musa, confirmed the development to a Punch correspondent on telephone.

He stated, “Yes, the Sheikh has arrived at the airport with his wife for their trip to India. They would be leaving in the next few hours.”

The PUNCH gathered that the IMN leader would be accompanied on the trip by the DSS operatives as ordered by the court.

When asked if the IMN leader fulfilled the conditions imposed by the Kaduna State Government, Musa explained that he had no information on it.

It was learnt that they would be travelling on a privately chartered aircraft.

Among other conditions, the state government had demanded that the Ministry of Foreign Affairs must confirm the appointments of the IMN leader and his wife with the Medanta Hospital, India, and undertake all necessary diplomatic arrangements and protocols to ensure compliance with the conditions of the medical leave.

Charles Igbinidu is a Public Relations practitioner in Lagos, Nigeria
@https://twitter.com/ionigeria
Previous Lampard hits back at Mourinho over his criticism after Chelsea’s defeat
Next Things will get from bad to worse if Yakubu Gowon fails to appeal to the Igbo nation to forgive Nigeria for the genocide that happened under his watch – FFK