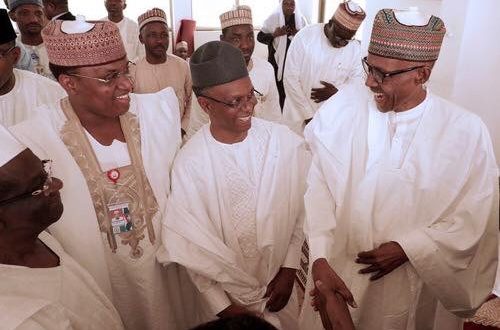 El-Rufai: I was not banned from Aso Rock

Gov. Nasiru El-Rufai of Kaduna State says he was never banned from coming to the Aso Rock Presidential Villa, Abuja and that nobody can stop him from visiting the place.

The governor stated this while fielding questions from State House correspondents after joining President Muhammadu Buhari to perform the two-raka’at Juma’at weekly prayer at State House Mosque, Abuja, on Friday,

Reports on the social media said El-Rufa’i was banned from the Presidential Villa for allegedly leaking a memo he wrote to Buhari on Sept. 22, 2016.

In the memo, El-Rufai alerted President Buhari that he was losing the vision and the momentum with which All Progressives Congress (APC) started its Change Agenda.

The governor also in the memo, advised the President to effect changes in the leadership of some federal agencies and establishments, and to communicate constantly with Nigerians, so they will know the plans of his government.

El-Rufai, however, told the State House correspondents that he was not stopped from coming to the Aso Rock, and that nobody can stop him from visiting the Villa.

According to him, he stopped frequenting the villa because the President needs quality time to rest and also attends to challenges of governance.

“As a governor I come here, I have blank cheques, no one checks me at the gate but I believe what the President needs is for those that love him to keep away from him and allow him to rest.

“The President needs quality time to rest because it is meeting too many people that strains leadership.

“I am a governor and I know that when I meet 10 people in a day I get really tired, it is not the paperwork, it is not really the memos approving them or asking questions that strain a leader, it is the stream of visitors.

“I do not want to contribute to the President’s problem by coming here every day. I am in touch with him,’’ he added.

The governor, therefore, appealed to Nigerians to show more understanding and love to the president by allowing him to rest and also concentrate more on his private and official engagements, saying that “visitors stress leaders’’.

“Let me appeal to all of us that love the President to please allow him some space so that he will recover.

“We need him and the country needs him, it is in our interest for the stability of the country, we should just let him be.

“It is absolutely necessary lets us leave him to do his work in the privacy of his room or his office without strings of visitors. Visitors stress leaders.’’

El-Rufa’i also described his relationship with Buhari as cordial, saying that the relationship had never been strained in anyway.

He, however, acknowledged that there were people within the presidency “that like me and there are those who don’t and it is normal.

“My relationship with the President has never been strained in anyway. I met with him last night,

“I did not talk about things like that but our relationship with him is like that of father and son and it is privilege for me.’’

Meanwhile, Chief Imam of the State House Mosque, Sheik Abdulwaheed Sulaiman, has called on Muslims and Christians to unite as brothers and sisters given the common Abrahamic origin of their religions.

The Chief Imam made the call in his Friday sermon with Buhari, some members of the National Assembly, ministers, El-Rufa’i  and Governor Ibikunle Amosun of Ogun state in attendance.

He stressed the need for unity among the followers of the two major religions, asking them to share kindness and hospitality.

“We all belong to God and to Him we will be going back,’’ he said.

Suleiman also urged all Nigerians to continue to support the administration of President Buhari ‘’as it fights corruption and insecurity in the land, at the same time seeking economic recovery and prosperity for all’’.

According to him, it is duty bound on Muslims to follow the path of Prophet Muhammed (SAW) as defined in the Qur’an.