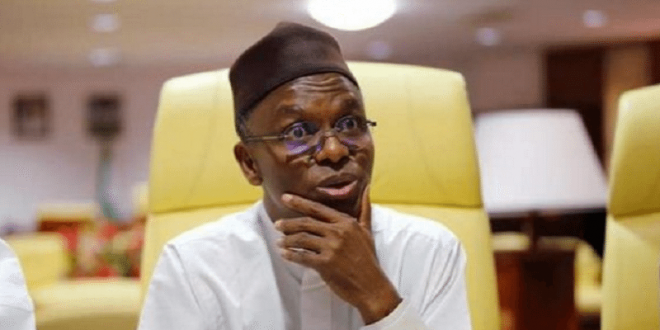 El-Rufai lied over killing of 66 Kaduna residents — CAN, NEMA, Sani

The Kaduna State Chapter of the Christian Association of Nigeria on Saturday dismissed claims by Governor Nasir el-Rufai that 66 persons were killed by gunmen in the Kajuru Local Government Area of the state.

The CAN Chairman in the state, Rev. Joseph Hayab, who stated this in a statement, insisted that the governor deliberately gave out the wrong information to deceive Nigerians and the international community.

He said the false alarm as contained in a statement by the governor on Friday evening, was aimed at stirring up violence in the state.

The statement read, “The press statement by the spokesman for Kaduna State Governor, Mr Samuel Aruwan, suggests that “the killings in Kajuru Local Government were carried yesterday (Friday) 15/2/2019. This is false in its entirety.

“We are aware that the incident happened in the late hours of Sunday 10 February to February 12, 2019, at about 1am at Gindin Gada in the Maro Ward of Kajuru Local Government, Kaduna State where unidentified hoodlums went into the village and killed about 11 people in their sleep.

“The incident led to reprisals. Two of the suspects were said to have been apprehended and handed over to the Divisional Police Officer in the area. It was in the afternoon of the said date of the attack (as contained in the press statement) that the District Head of Kufana, Mr Titus Dauda, and four of his local chiefs were released after their invitation by the Department of State Services.

“We see this as an illogical intentional, premeditated attempt at stirring violence in the state for whatever expected gains. The incidence of raising false alarm by the Kaduna State Government should make Nigerians realise that some of our leaders are also guilty of hate speech and that makes them major actors in the game that has denied us peace and has claimed the lives of our love ones.’’

The senator representing Kaduna Central senatorial district whose constituency covered the affected local government, Shehu Sani, also wondered why the incident that happened on Sunday would be made an issue on the eve of the general elections.

“He said, “What the people of the area told me was that the issue happened since Sunday and the security agencies waded in and resolved it immediately. There was no tension that can threaten peace in the area.

Sani added that the people were ready to vote and refused to be provoked despite desperate attempts by some people to instigate them.

Also, the Zonal Coordinator, North-West office of the National Emergency Management Agency, Mr. Ishaya Chonoko, told SUNDAY PUNCH in a telephone interview on Saturday that there were no fresh killings in Kajuru LGA on Friday as claimed by the governor.

He attributed the wrong information to the activities of those he described as “unpatriotic Nigerians” who were out to take advantage of the general elections to instigate violence in the state.

“There was an attack last week (Sunday) where 11 people were said to have been killed. It was the usual tribal clash between the Fulani and the indigenes. Anytime there is a clash between two tribes in Kaduna, there is usually reprisal.

“We made necessary contacts only to discover that it was merely a rumour to instigate violence. Please disregard it. It is not true at all.”

A resident of the area, Josiah Joshua, also told one of our correspondents that the governor was economical with the truth by claiming that only the Fulani were killed in the attacks.

He said, “The incident happened in the Kajuru LGA and 90 per cent of the residents are Adara tribe and not Fulani. The governor’s claims that Fulani were killed were not true.”

A community leader in the area, who spoke with SUNDAY PUNCH on condition of anonymity because of the tension the governor’s statement had caused, said the casualty figure released by el-Rufai was a far cry from the situation on the ground.

He said, “What happened was that the Fulani launched an attack on the Adara people and the people revenged against the Fulani.

“Why is it that it was the governor that ‘broke’ the said news when we have the various security agencies in the state? How did he count the figure of the supposed dead people?’’