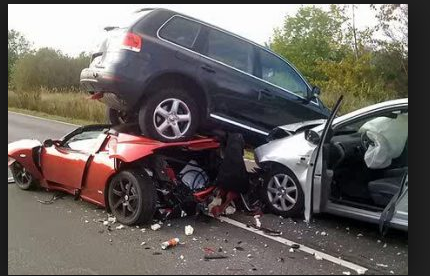 Eight-Month-Old Baby, Others Die In An Auto Crash Around Enugu

The Police in Enugu has commenced an investigation into a multiple motor accident that claimed seven lives in Ugwuoba Community, Oji-River Local Government Area, along Enugu-Onitsha Expressway.

The Command’s spokesman, SP Ebere Amaraizu, said in a statement on Wednesday that the incident, occurred on Sunday, April 8 at about 8 pm.

“The bus, in turn, hit another Mitsubishi bus with registration number FGG 233 XG, and as a result, both vehicles crash-landed on the truck.

“No fewer than seven passengers were confirmed dead including an eight-month-old baby who later died at a nearby hospital during medical attention,’’ he said.

Amaraizu noted that the identities of the deceased persons were yet to be ascertained.

According to him, other victims who sustained various degrees of injuries were rushed to Salvation and Faith Hospitals in Oji River for treatment.

“The deceased bodies have been deposited at the General Hospital Mortuary in Oji River,’’ he added.