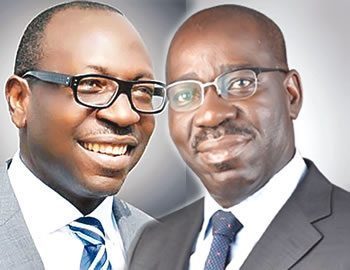 Led in evidence by Mr Roland Otaru, a Senior Advocate of  Nigeria,  the witnesses, who were  agents in  the local council during the poll,  testified for the Peoples Democratic Party(PDP) and Osagie Ize-Iyamu, its governorship candidate.

The petitioners are challenging the declaration by the Independent National Election Commission(INEC) of Mr Godwin Obaseki as winner of the election.

The petitioners had  named the INEC, Obaseki and the APC as first, second and third respondents respectively in the petition.

INEC had declared Obaseki winner of the Edo governorship election after he polled 319,483 votes to defeat Ize-Iyamu, his closest rival, who scored a total of over 250,000 votes.

At the resumed hearing on Tuesday, the witnesses, who adopted their Oct.19, 2016  deposition statements on oath as their pieces of evidence at the tribunal, insisted that there were cases of   over voting, non accreditation of voters, multiple voting or wrongful collation of results.

Mr Osarenren Edomwandagbn,  a PDP polling agent at Igioshodinikpemagba in Oghode ward, Ovia North  East Local Government, said “I  insist as in my deposition statement that there were over voting and non accreditation of voters before voting.’’

Under cross examination, the witness said “I  testify that even my junior sister’s name on the voter register was ticked to have been voted in that election even when she was never around but abroad during election.’’

Mr Omorogieva Osayemwenre, another  PDP agent in Oghode Ward in Obaretin village in the same council area,  stated  that  “everything I  said in my deposition is as correct as I  made it.’’

“I  stated that there were either no accreditation, over voting and wrongful collation of results,’’ he said.

Witnesses who had  so far testified for the petitioners came to  79 out of the more than 1,000 expected  to appear.