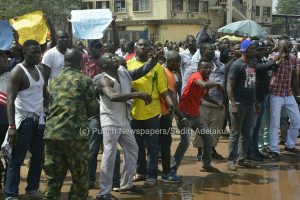 Edo election: Protest at INEC office as results are being announced

Some supporters of the Peoples Democratic Party (PDP) are protesting outside the office of the Independent National Electoral Commission (INEC) in Benin City.

The protesters alleged that the results being announced at the Collation centre were altered by the electoral commission officials.

Security officials have formed a barricade outside the INEC office to stall any breakdown of law and order.

The announcement was, however, trailed by protests over allegations of change of results by the electoral commission, which has led to barricade being formed by security officials.

The police have dispersed the crowd with tear gas and gun shots.