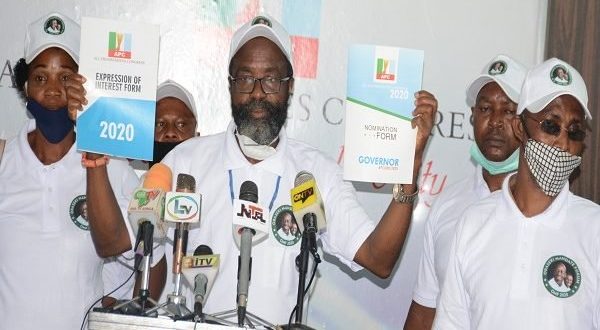 The chairman of the forum, Chief Nathaniel Momoh obtained the nomination form from the party’s national Secretariat on behalf of Governor Obaseki, few hours after another aspirant; Pastor Osagie Ize-Iyamu picked his nomination form

Addressing newsmen after the purchase of the form, Momoh said electorates from the 18 local government Councils of the State, party members, apolitical citizens and residents in the State and Abuja joined forces together to pick the nomination and expression of interest form for the governor.

The forum said their decision was informed by Obaseki’s sterling performance in the last four years which he said has proved that the governor has the capacity to move the State forward, in spite of the many challenges and distractions that have manifested in various forms.

According to Momoh, “this form, willfully and freely purchased by the people represents the mandate of the Edo people – young and old, city bred and rural dwellers, who are witnesses to the gradual transformation of their communities by the steady advancement of governance that touches the life of the people.

“This form represents the buy-in and acceptability of majority of Edo people, both at home and in diaspora, who tasked themselves to ensure that their mandate is secured in the candidature of Godwin Nogheghase Obaseki, for the September 19, 2020 governorship election in Edo State.

“This form further signposts the will of the people and defeat of any kind of imposition plotted or being plotted against the Edo people. By this purchase, the good people of Edo State have spoken with one voice and have decided to entrust their mandate on His Excellency, the hardworking incumbent Governor, Godwin Nogheghase Obaseki to continue with his developmental strides”.

The forum maintained that “Obaseki is not just an APC project. It is also the project of the market woman in Uselu Market, the trader in Aviele, Council of Chiefs in 05050, the 18 years and above student in Owan, the fruit trader in Iruekpen, that meat seller in Agenebode, that palm wine tapper in Esan, the cassava farmer in Ikpeshi, and many others who stood solidly behind His Excellency”.

Momoh then said that Obaseki’s, “is not a project for a gang of elites, who seek to wet their appetite with political power, relevance and undue control of the resources of the State, but one for the masses and well-meaning individuals passionate about the progress and development of the State.”