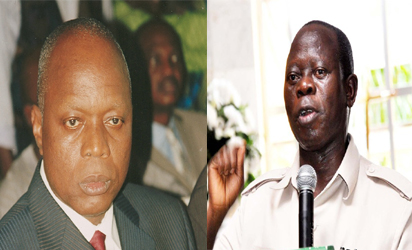 AS the race for Osadebey Avenue gathers momentum, it becomes increasingly clear that the mass media must play the essential roles of educating, informing and entertaining the people. Among other things, the media has a responsibility to help the people make informed decisions and judgments.

That explains why – depending on available materials – this column intends to bring to you the credentials that the various aspirants are bringing to the table.

Last Wednesday, The Right Hon Dr. Pius Egberanmwen Odubu, declared his intension to run for the office of Governor of Edo State in the forth-coming governorship election on the platform of the All Progressives Congress, APC. This is our focus for today.

It is necessary to highlight a few points about the man, Pius Egberanmwen Odubu, the incumbent Deputy Governor of Edo State, which bespeak him as a man who in all respects and by all known standards, has distinguished himself in several ways and is destined to make history.

From very early in life, Odubu started preparing himself for a respectable leadership role in the affairs of his community and the larger society. This is one way of appreciating the fact that he has spent a good part of his life for self-development through education and management training.

Little Pius was born in 1958 in the little village of Urhomehe, Urhomigbe North Ward in Orhionmwon Local Government Area of Edo State. He had his primary education in St. Pius Primary School, Urhomehe, before proceeding to Immaculate Conception College, Benin City, where he was a recipient of an Academic Scholarship Award from the then Benin Area Joint Board.

In his determination to build up the necessary intellectual robustness relevant to the machinery and process of service to humanity, Odubu soon transcended the narrow confines of a secondary education when, in 1977, he proceeded to the United States of America for further studies.

Odubu has to his credit, a chain of quality degrees, including BA (Hons.) in Political Science; Doctor of Jurisprudence in Law; Master of Law with major concentration in International and Comparative Law; and BL (Barrister and Solicitor at Law).

On his return to Nigeria in 1985, Odubu was enrolled in the Nigerian Law School, Lagos and was called to the Nigerian Bar in October 1986.

After his call to Bar, Odubu had a flourishing law practice in Benin City until 1999, when he was elected into the House of Representatives to represent Orhionmwon/Uhunmwode Federal Constituency of Edo State. He was re-elected in 2003.

While in the House of Representatives, Odubu was a ranking member of the Committees on Appropriations; Federal Capital Territory and Labour. He was Deputy Chairman of the Commerce Committee. At various times, Odubu served in the following Committees: Works, Marine Transport, Commerce, Navy, Anti-corruption and Public Accounts.

What is Odubu bringing to the table? Good education, cognate experience, diligence, intelligence, transparency, integrity and accountability shall be some of the visible hallmarks of his administration. His policy thrust shall be based on five cardinal points: Job Creation; Wealth Creation; Infrastructural Development; Agricultural Development and Good Governance.

Odubu is a man of peace. He has remained loyal to his boss, Comrade Adams Oshiomhole, Odubu is a team-player who gets along with his colleagues. Because of his loyalty, Comrade Adams Oshiomhole has asserted on various occasions that Odubu is the best Deputy Governor in Nigeria. By extrapolation, this has been interpreted in many quarters to mean that if given the opportunity, Odubu will be the best Governor in Nigeria.

On his part Odubu has the kindest words for his boss; “I deeply appreciate my boss and elder brother, Comrade Adams Oshiomhole, for giving me the opportunity to work with him in the last seven and a half years…. I have been in Oshiomhole School of governance and it has been most beneficial and rewarding”.

Odubu cuts across party divides. It is instructive that on the day he declared his intension to run for the office of governor of Edo State, the PDP was the first to congratulate him, pouring encomiums on him and suggesting perhaps that he is the best man for the job. If what we hear from the grapevine becomes true, Edo State may as well be on the enviable path to becoming the first State in Nigeria to produce a consensus candidate for a gubernatorial election.

In any case, the Bible is right that if a man’s ways are pleasing to God, He will make his enemies to be at peace with him.

Odubu is a writer’s delight, any day. We present to you, a most perfect manifestation of political craftsmanship and hope for our people; a man destined to make history, yet, whose humility belies the robustness of his attainment in life.
We present to you, a total embodiment of consensus politician; one man who has a vision and mission to work with other patriotic Nigerians for the fulfilment of the Nigerian Dream and the realisation of the manifesto and the Freedom Charter of the All Progressives Congress, which hold tremendous promise for the prosperity, greatness and unity of this nation.

We present to you The Right Honourable (Dr) Pius Egberanmwen Odubu, one man who has a full grasp of the inner workings of the three branches and the three tiers of government; a lawyer; a legislator extra-ordinaire; an administrator; a political strategist, tactician; an adept in political engineering; a symbol of political honour, confidence and hope; an exponent of human kindness; a most perfect manifestation of humility, impervious tenacity in the service of this great nation and hope for a sustainable democratic polity in Edo State and, indeed, in Nigeria.

Odubu is happily married to Deaconess (Mrs.) Endurance Odubu and the union is blessed with four children.

Charles Igbinidu is a Public Relations practitioner in Lagos, Nigeria
@https://twitter.com/ionigeria
Previous AMCON Revs up recovery effort, appoints professional debt resolution firms as partners
Next How I got involved in Sanusi’s letter to Jonathan, by Amaechi