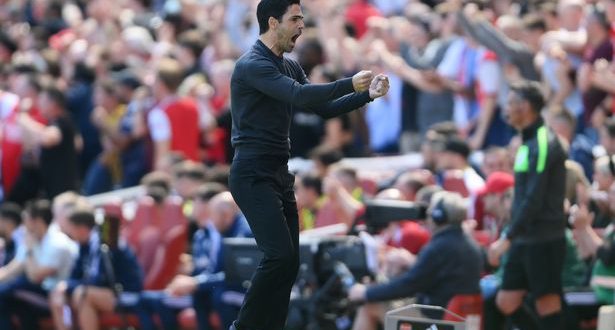 Arteta signed a new contract with Arsenal on Friday

ARSENAL 2-1 LEEDS: Eddie Nketiah scored two goals in the opening 10 minutes to boost Arsenal’s top-four hopes and send Leeds into the relegation zone after their captain, Luke Ayling, was sent off

Arsenal significantly boosted their hopes of a top-four finish by beating a 10-man Leeds United 2-1 at the Emirates.

The Gunners took an early lead through Eddie Nketiah, who punished Peacocks goalkeeper Illan Meslier’s howler with an instinctive finish after just five minutes. It didn’t take long for the red-hot Nketiah his second, profiting from the excellent Gabriel Martinelli ‘s good work out wide.

Martinelli was involved in the game’s next flashpoint, as Luke Ayling flew in two-footed on him and received a straight red card after a VAR check for his horrific challenge. Diego Llorente pulled one back midway through an uninspiring second half but it was too little, too late for the strugglers.

It was a win which sent Arsenal four points clear of rivals Tottenham Hotspur in the race to finish fourth, responding to their dogged 1-1 draw at Liverpool on Saturday evening ahead of Thursday’s crunch north London derby. Leeds, however, are now staring Premier League relegation in the face after dropping down into the bottom three after Everton ‘s much-needed victory over Leicester City.

The match was Mikel Arteta ‘s first after signing a new contract until 2025, and his first ambition is to guide the Gunners back in the Champions League. Jesse Marsch, meanwhile, was hoping to lead the Peacocks’ survival surge, having suffered a hammering at the hands of Manchester City last week which saw reliable figure Stuart Dallas break his leg.

Here are six talking points from the Emirates.

For a match that had so many permutation at both ends of the table, it was crucial to start off on the right foot. Sadly for Leeds goalkeeper Illan Meslier, the memo didn’t travel as far back as his box and the 22-year-old gifted Eddie Nketiah a goal with only five minutes on the clock.

Meslier received the ball inside his six-yard area and in a moment reminiscent of Manchester City stopper Zack Steffen’s howler against Liverpool in their recent FA Cup semi-final, took a loose touch and allowed the Arsenal striker’s eyes to light up. Spotting the guilt-edged opportunity, Nketiah nipped in and hit the back on the net in one motion.

Refusing to revel in the Frenchman’s horror and celebrate against his former club, the in-form Gunners goalscorer made it four strikes is as many games to show why Mikel Arteta would do well to convince him to sign a new deal when his current contract expires this summer – and he wasn’t done there.

Five minutes later and it was 2-0, with Nketiah this time finishing off a much more difficult chance to take his tally to five goals. The 22-year-old was found by Gabriel Martinelli in the box after the Brazilian charged down the left-hand byline and cut the ball back. In acres of space, Nketiah tucked home while slightly off balance and doubled Arsenal’s lead.

Leeds fans were left dismayed at their team’s hapless start to the match and soon learned the news that Everton had taken the lead at Leicester, plunging them into the drop zone. Less than a minute later, though, Jesse Marsch’s men were handed a welcome boost, as Patson Daka equalised at the King Power to put Everton back in the bottom three.

As if Leeds’ own first half couldn’t get any worse, captain Luke Ayling decided to put his chances of playing another minute of Premier League football on the line by lunging into Martinelli with an out-of-control, two-footed tackle in front of the visiting supporters. Chris Kavanagh reacted quickly by brandishing a yellow card, but it was evident upon the replay that VAR needed to step in.

A check on the pitch-side monitor confirmed it was a horrific challenge, and Kavanagh had no choice but to send Ayling for an early bath, meaning the right-back will be banned for the rest of the season. During the VAR check, Leeds’ star man, Raphinha, lost his head and saw yellow, needing his teammates to calm him down.

Marsch reacted by bringing on defender Pascal Struijk for striking sensation Joe Geldhart and after Mateusz Klich picked up the latest booking, it looked as if keeping 10 men on the pitch would be some sort of achievement by the final whistle. Then came more bad news for the Peacocks: Everton had retaken the lead and “you’re going down” rang around the Emirates.

No wonder Jamie Carragher labelled Ayling “an idiot” at half-time.

Ayling was red-carded for a horrific tackle on Martinelli

Just as it began to dawn on the Emirates crowd that the day’s entertainment was over, Leeds pulled a goal back from their first corner and shot of the game. In the 66th minute, Diego Llorente got on the end of Junior Firpo’s flick-on at the near post and neatly finished at the back stick.

The goal dumfounded Aaron Ramsdale, who’d hardly had anything to do for the first hour and it perked up the Peacocks’ fans, whose support had never been in question – unlike their team’s quality. Unfortunately for them, their fightback wasn’t to be and they left north London with nothing to show for a valiant second-half effort.

Llorente pulled a goal back for Leeds

With an ultimately easy Sunday afternoon in the rearview mirror, Arteta and co’s full focus will now be on winning a mouthwatering north London derby on Thursday. The Gunners travel across town with an opportunity to kill Tottenham’s hopes of Champions League football in what will be both teams’ 36th league game of the campaign.

Not only that, Arsenal are now hot on Chelsea’s heels, one point behind them but boasting a considerably weaker goal difference. Having slumped to eighth last term, finishing behind only Liverpool and Manchester City in the table would be a rather remarkable feat by Arteta, and further proof that the process is indeed working.