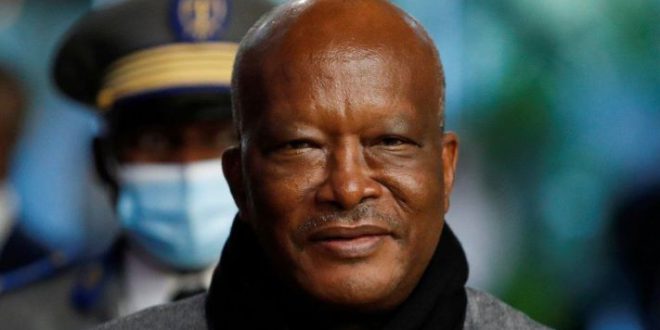 President Kaboré pictured at the Paris Peace Forum in November

The West African regional grouping ECOWAS on Monday voiced deep concern over what it called a “coup attempt” in Burkina Faso amid uncertainty over President Roch Marc Christian Kaboré’s fate. While reports said the president was detained after troops staged a mutiny Sunday night, some Burkinabé officials have denied the reports of his arrest.

Shots were heard late Sunday near Kaboré‘s home after soldiers staged mutinies at several barracks to demand the sacking of the country’s military top brass and more resources for the battle against Islamist insurgents.

Residents also reported they saw a helicopter above the the president’s home in the capital Ouagadougou.

It followed gunfire earlier Sunday at several army bases, prompting fears of yet another coup in a volatile West African country prone to military takeovers.

Video from the capital appears to show armoured vehicles – reportedly used by the presidency – peppered with bullet holes and abandoned in the street.

Mobile internet services have been disrupted, though fixed-line internet and domestic wi-fi are working. Soldiers have also surrounded the state television headquarters and there was no live programming on Monday.
Share

Charles Igbinidu is a Public Relations practitioner in Lagos, Nigeria
@https://twitter.com/ionigeria
Previous Formula One stars told they must be vaccinated against Covid to race at Australian GP IN April to avoid another Novak Djokovic drama
Next Money Laundering: Court orders arrest of ex-Petroleum Minister, Diezani