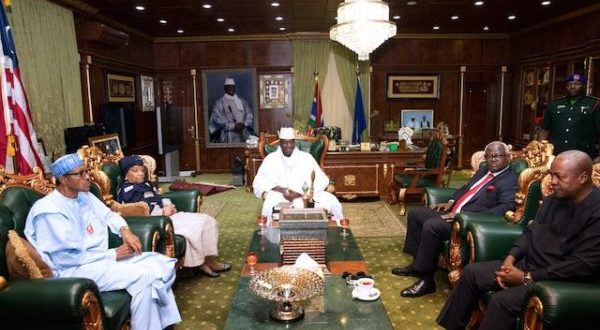 West African leaders in Banjul trying to convince Yahya Jammeh to acknowledge his defeat in the presidential election have met a stone wall as the Gambian President has petitioned the Supreme Court over his defeat by real estate businessman, Adama Barrow in the Dec. 1 election.

Interestingly, the legal move was made on the same day his soldiers occupied the headquarters of the electoral commission and West African leaders failed to reach a deal that would see him accept the result and end a deepening political crisis.

The legal petition filed by his party, the Alliance for Patriotic Reorientation and Construction now raises the prospect that Barrow’s narrow victory, which was poised to end years of Jammeh’s autocratic rule, may be overturned.

“The petition prays that it be determined that the said Adama Barrow was not duly elected or returned as president and that the said election was void,” read the text of the document submitted to the court and seen by Reuters.

Jammeh, who has ruled Gambia since taking power in a 1994 coup and is accused of widespread rights abuses, initially conceded defeat to his main challenger, Adama Barrow. But in a dramatic about-face that drew international condemnation he then rejected the poll results last Friday.

“It is not time for deal

. It is not something that can happen in one day. It is something that we have to work on,” Johnson Sirleaf said as the presidents prepared to leave Gambia.

Regional leaders will discuss the crisis at an ECOWAS summit in Nigeria on Saturday, she said, adding Jammeh had given her assurances that peace and stability would be preserved.

But in an apparent sign that Jammeh was further entrenching his position, security forces seized control of the Independent Electoral Commission headquarters, which holds the original poll records.

“The military came to my office and said I am not to touch anything and told me to leave,” said commission chairman Alieu Njei. “I am worried for my safety.”

Barrow, who received the unified backing of Gambia’s opposition in the election, has vowed to reverse Jammeh’s most capricious decisions, including a recently announced withdrawal from the International Criminal Court.

“I think everyone knows the issue here. There is a standoff between the government and our side,” Barrow said after meeting the regional heads of state.