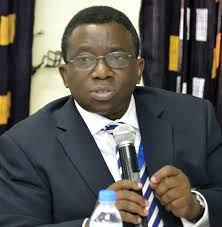 The federal and Lagos State governments Thursday said Kenya Airways would be sanctioned for conveying a corpse from an Ebola-infested country, Democratic Republic of Congo (DRC), to Nigeria without clearance.

Consequently, the governments condemned the action of the airline, noting that the ban on repatriation of human remains into the country was still in force.

The Minister of Health, Prof. Isaac Adewole, said this at a news conference with the Commissioner for Health in Lagos State, Dr. Jide Idris, in Alausa, Lagos Thursday.

THISDAY had reported exclusively Thursday that the corpse of a young man was flown into the Murtala Muhammed International Airport (MMIA), Lagos from DRC by Kenya Airways.

THISDAY also reported that the corpse was flown in on-board a Kenya Airways flight and quarantined by the Port Health Services (PHS) to ascertain if the young man was killed by Ebola virus since the DRC was currently facing another outbreak of the deadly haemorrhagic fever.

Consequently, the minister had said a test was conducted on the body and had tested negative to Ebola Virus Disease (EVD), though he declined to disclose what caused the death of the young man, citing medical confidentiality.

But at the conference, Thursday, the minister said a letter of investigation had been forwarded to Kenya Airline to establish why the airline flew a body from DRC into Nigeria without approval.

Adewole, who was represented at the conference by Dr. Joshua Obasanya, condemned the decision of the airline to bring in a corpse into the country without approval from the regulatory agencies.

He said if it was found that the airline breached protocols, it would be sanctioned appropriately, although he said the federal government was waiting for the airline’s response to the letter.

Aside, a Consultant Epidemiologist at the Nigerian Centre for Disease Control (NCDC), Dr. Biodun Ogunniyi, said there was no fresh outbreak of Ebola in Nigeria, but condemned what the airline did.

He said that the federal government had the wherewithal to deal with any emergent outbreak of disease in the country.

Idris, who spoke elaborately on the alleged misconduct of the airline at the conference, said Kenya Airways conveyed the deceased to Nigeria against the extant practice and regulation.

He said the airline brought the remains to the country without all necessary documentations required to process its clearance by the Department of Port Health Services, Federal Ministry of Health.

“The Federal Government of Nigeria and relevant agencies condemn this deliberate breach,” he said, adding: “Necessary steps are being taken by the regulatory authority to sanction the airline in a bid to prevent future occurrence.”

Idris said the federal government banned the repatriation of human remains into the country in all points of entry as a precautionary measure to avoid importation of any infectious disease, saying the ban was one of the interventions Nigeria took when the virus broke out three years ago.

He said the Federal Ministry of Health and Port Health Division issued guidelines to all airlines on the procedures to be followed to obtain a waiver before repatriating any human remains into the country.

“The government will like to reiterate again that the ban is still in force and any attempt to contravene this ban will attract serious sanction,” he warned.

Idris said as soon as the body was brought in from DRC, the officials of Port Health, Nigeria Centre for Disease Control, (NCDC) and the Lagos State Ministry of Health investigated the cause of death of the remains and took samples for laboratory investigation.

Idris said the laboratory report showed that there was no evidence of Ebola infection or any other contagious infections on the corpse, while assuring everyone to go about their normal business without any anxiety.

“Government will want everyone to be vigilant and encourage all our officials at land, sea and air borders to continue the screening of international passengers,” he said.

Previous How We Plan To Sack Obaseki – PDP Chieftain
Next Nigeria’s Unity Negotiable – Obasanjo, Osinbajo, Others