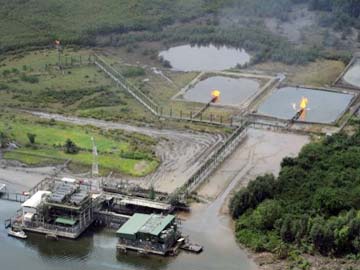 A Dutch court on Friday ordered Shell to pay compensation in a long-running case brought by four Nigerian farmers who accuse the oil giant of causing widespread pollution.

After 13 years of legal wrangling, an appeals court in The Hague ruled that Shell’s Nigerian branch must pay out for oil spills on land in two villages.

The case, backed by the Netherlands arm of environment group Friends of the Earth, has dragged on so long that two of the Nigerian farmers have died since it was first filed in 2008.

The amount of damages would be determined later, the court said. It did not specify how many of the four farmers would receive compensation.

The farmers first sued Shell in 2008 over pollution in their villages Goi, Oruma and Ikot Ada Udo, in southeastern Nigeria.

A lower court in the Netherlands found in 2013 that Shell should pay compensation for one leak but that Shell’s parent company could not be held liable in a Dutch court for the actions of its Nigerian subsidiary.

But in 2015 the Hague appeals court ruled that Dutch courts did indeed have jurisdiction in the case.

On Friday, the court ruled that Shell Nigeria must pay compensation for the leaks at Goi and Oruma.

“In the Uruma cases, Shell Nigeria and… Royal Dutch Shell are ordered to equip the pipeline with a leak detection system so that environmental damage can be limited in the future,” the court said.

Shell Nigeria should have shut down oil supplies on the day of the spill in the cases in Goi, it said.

The court said it needed more time to resolve the case of Ikot Ada Udo, saying that the leak was due to sabotage but it was not clear whether Shell could still be held liable for it, and for cleaning up.

“For the inhabitants of the Niger Delta it is crucial that their land is cleaned up and their lost crops and livelihoods are compensated by the guilty party: Shell,” Donald Pols of Friends of the Earth Netherlands said in a statement ahead of the case.

Shell has always blamed all of the spills on sabotage and said it has cleaned up with due care where pollution has occurred.

At a hearing last year lawyers for the farmers showed gushing and burning oil spills as well as villagers dragging their hands through water sources, their hands streaked with the substance afterwards.

Nigeria was the world’s ninth-largest oil producer in 2018, pumping out volumes valued at some $43.6 billion (37 billion euros), or 3.8 percent of total global production.

In a separate case in the Netherlands, the widows of four Nigerian activists executed by the military regime in the 1990s have accused Shell of complicity in their deaths.

Shell also faces a landmark legal bid to force it to meet emissions targets in the Paris climate accords, brought by several environmental groups in the Netherlands led by Friends of the Earth in 2019.