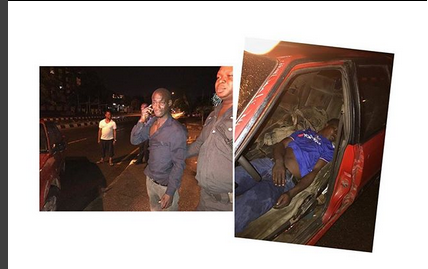 Few weeks ago, two friends who were driving through Awolowo in Front of Alausa Secretariat, Lagos, very early from Fela Shrine, had an accident.


Their vehicle left its lane, crossed the median to the other lane only to be stopped by a kerb. While the driver, after the accident, adjusted his seat and slept off, his friend in the passenger’s seat tried to escape the scene.

He was, however, chased and arrested by RRS officers stationed close to the accident point.

Previous We Are Thieves Not Armed Robbers, Suspects Correct Magistrate
Next Dog Dies Next To His Master’s Grave After Refusing To Leave The Grave For 11 Yrs